The Metric Correlations (MC) feature lets you quickly find metrics and charts related to a particular window of interest that you want to explore further. By displaying the standard Netdata dashboard, filtered to show only charts that are relevant to the window of interest, you can get to the root cause sooner.

Because Metric Correlations uses every available metric from your infrastructure, with as high as 1-second granularity, you get the most accurate insights using every possible metric.

When viewing the overview or a single-node dashboard, the Metric Correlations button appears in the top right corner of the page. 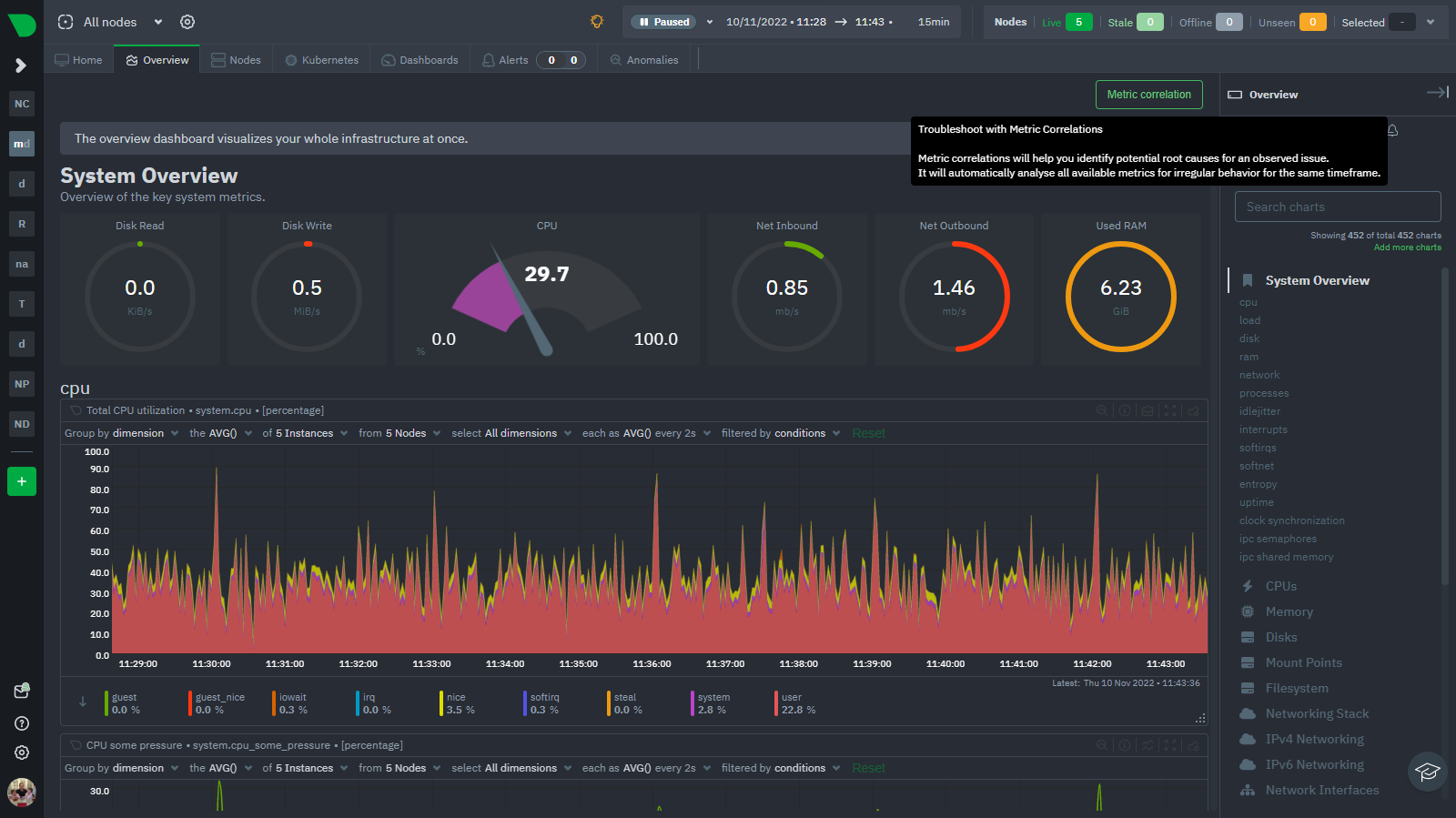 To start correlating metrics, click the Metric Correlations button, then hold the Alt key (or ⌘ on macOS) and click-and-drag a selection of metrics on a single chart. The selected timeframe needs to be at least 15 seconds for Metric Correlation to work.

Press the Find Correlations button to start up the correlations process, the button is only enabled when a valid timeframe is selected (at least 15 seconds). Once pressed, the process will score all available metrics on your nodes and return a filtered version of the Netdata dashboard. Now, you'll see only those metrics that have changed the most between a baseline window and the highlighted window you have selected.

These charts are fully interactive, and whenever possible, will only show the dimensions related to the timeline you selected.

You can interact with all the scored metrics via the slider. Slide toward show less for more nuanced and significant results, or toward show more to "loosen" the threshold to explore other charts that may have changed too, but in a less significant manner.

If you find something else interesting in the results, you can select another window and press Find Correlations again to kick the process off again.

MC enables a few input parameters that users can define to iteratively explore their data in different ways. As is usually the case in Machine Learning (ML), there is no "one size fits all" algorithm, what approach works best will typically depend on the type of data (which can be very different from one metric to the next) and even the nature of the event or incident you might be exploring in Netdata.

So when you first run MC it will use the most sensible and general defaults. But you can also then vary any of the below options to explore further.

There are two algorithms available that aim to score metrics based on how much they have changed between the baseline and highlight windows.

Behind the scenes, Netdata will aggregate the raw data as needed such that arbitrary window lengths can be selected for MC. By default, Netdata will just Average raw data when needed as part of pre-processing. However other aggregations like Median, Min, Max, Stddev are also possible.

Netdata is different from typical observability agents since, in addition to just collecting raw metric values, it will by default also assign an "Anomaly Bit" related to each collected metric each second. This bit will be 0 for "normal" and 1 for "anomalous". This means that each metric also natively has an "Anomaly Rate" associated with it and, as such, MC can be run against the raw metric values or their corresponding anomaly rates.

Metric Correlations on the agent​

As of v1.35.0 Netdata is able to run the Metric Correlations algorithm (Two Sample Kolmogorov-Smirnov test) on the agent itself. This avoids sending the underlying raw data to the original Netdata Cloud based microservice and so typically will be much much faster as no data moves around and the computation happens instead on the agent.

Enabling/Disabling Metric Correlations on the agent​

As of v1.35.0-22-nightly Metric Correlation has been enabled by default on all agents. After further optimizations to the implementation, the impact of running the metric correlations algorithm on the agent was less than the impact of preparing all the data to send to cloud for MC to run in the cloud, as such running MC on the agent is less impactful on local resources than running via cloud.

Should you still want to, disabling nodes for Metric Correlation on the agent is a simple one line config change. Just set enable metric correlations = no in the [global] section of netdata.conf

You can read more about all the ML powered capabilities of Netdata here. If you aren't yet familiar with the power of Netdata Cloud's visualization features, check out the Nodes view and learn how to build new dashboards.