Netdata is more than a multitude of generic system-level metrics and visualizations. Instead of providing only a bird's eye view of your system, leaving you to wonder exactly what is taking up 99% CPU, Netdata also gives you visibility into every layer of your node. These additional layers give you context, and meaningful insights, into the true health and performance of your infrastructure.

One of these layers is the process. Every time a Linux system runs a program, it creates an independent process that executes the program's instructions in parallel with anything else happening on the system. Linux systems track the state and resource utilization of processes using the /proc filesystem, and Netdata is designed to hook into those metrics to create meaningful visualizations out of the box.

While there are a lot of existing command-line tools for tracking processes on Linux systems, such as ps or top, only Netdata provides dozens of real-time charts, at both per-second and event frequency, without you having to write SQL queries or know a bunch of arbitrary command-line flags.

With Netdata's process monitoring, you can:

How does Netdata do process monitoring?​

The process and groups settings are used by two unique and powerful collectors.

apps.plugin looks at the Linux process tree every second, much like top or ps fax, and collects resource utilization information on every running process. It then automatically adds a layer of meaningful visualization on top of these metrics, and creates per-process/application charts.

ebpf.plugin: Netdata's extended Berkeley Packet Filter (eBPF) collector monitors Linux kernel-level metrics for file descriptors, virtual filesystem IO, and process management, and then hands process-specific metrics over to apps.plugin for visualization. The eBPF collector also collects and visualizes metrics on an event frequency, which means it captures every kernel interaction, and not just the volume of interaction at every second in time. That's even more precise than Netdata's standard per-second granularity.

Per-process metrics and charts in Netdata​

With these collectors working in parallel, Netdata visualizes the following per-second metrics for any process on your Linux systems:

As an example, here's the per-process CPU utilization chart, including a sql group/dimension.

Configure the Netdata Agent to recognize a specific process​

To monitor any process, you need to make sure the Netdata Agent is aware of it. As mentioned above, the Agent is already aware of hundreds of processes, and collects metrics from them automatically.

But, if you want to change the grouping behavior, add an application that isn't yet supported in the Netdata Agent, or monitor a custom application, you need to edit the apps_groups.conf configuration file.

Navigate to your Netdata config directory and use edit-config to edit the file.

These groups are then reflected as dimensions within Netdata's charts.

See the following two sections for details based on your needs. If you don't need to configure apps_groups.conf, jump down to visualizing process metrics.

As explained above, the Netdata Agent is already aware of most standard applications you run on Linux nodes, and you shouldn't need to configure it to discover them.

However, if you're using multiple applications that the Netdata Agent groups together you may want to separate them for more precise monitoring. If you're not running any other types of SQL databases on that node, you don't need to change the grouping, since you know that any MySQL is the only process contributing to the sql group.

Let's say you're using both MySQL and PostgreSQL databases on a single node, and want to monitor their processes independently. Open the apps_groups.conf file as explained in the section above and scroll down until you find the database servers section. Create new groups for MySQL and PostgreSQL, and move their process queries into the unique groups.

Restart Netdata with sudo systemctl restart netdata, or the appropriate method for your system, to start collecting utilization metrics from your application. Time to visualize your process metrics.

Let's assume you have an application that runs on the process custom-app. To monitor eBPF metrics for that application separate from any others, you need to create a new group in apps_groups.conf and associate that process name with it.

Restart Netdata with sudo systemctl restart netdata, or the appropriate method for your system, to start collecting utilization metrics from your application.

Now that you're collecting metrics for your process, you'll want to visualize them using Netdata's real-time, interactive charts. Find these visualizations in the same section regardless of whether you use Netdata Cloud for infrastructure monitoring, or single-node monitoring with the local Agent's dashboard at http://localhost:19999.

If you need a refresher on all the available per-process charts, see the above list.

apps.plugin puts all of its charts under the Applications section of any Netdata dashboard.

Let's continue with the MySQL example. We can create a test database in MySQL to generate load on the mysql process.

apps.plugin immediately collects and visualizes this activity apps.cpu chart, which shows an increase in CPU utilization from the sql group. There is a parallel increase in apps.pwrites, which visualizes writes to disk.

Next, the mysqlslap utility queries the database to provide some benchmarking load on the MySQL database. It won't look exactly like a production database executing lots of user queries, but it gives you an idea into the possibility of these visualizations. 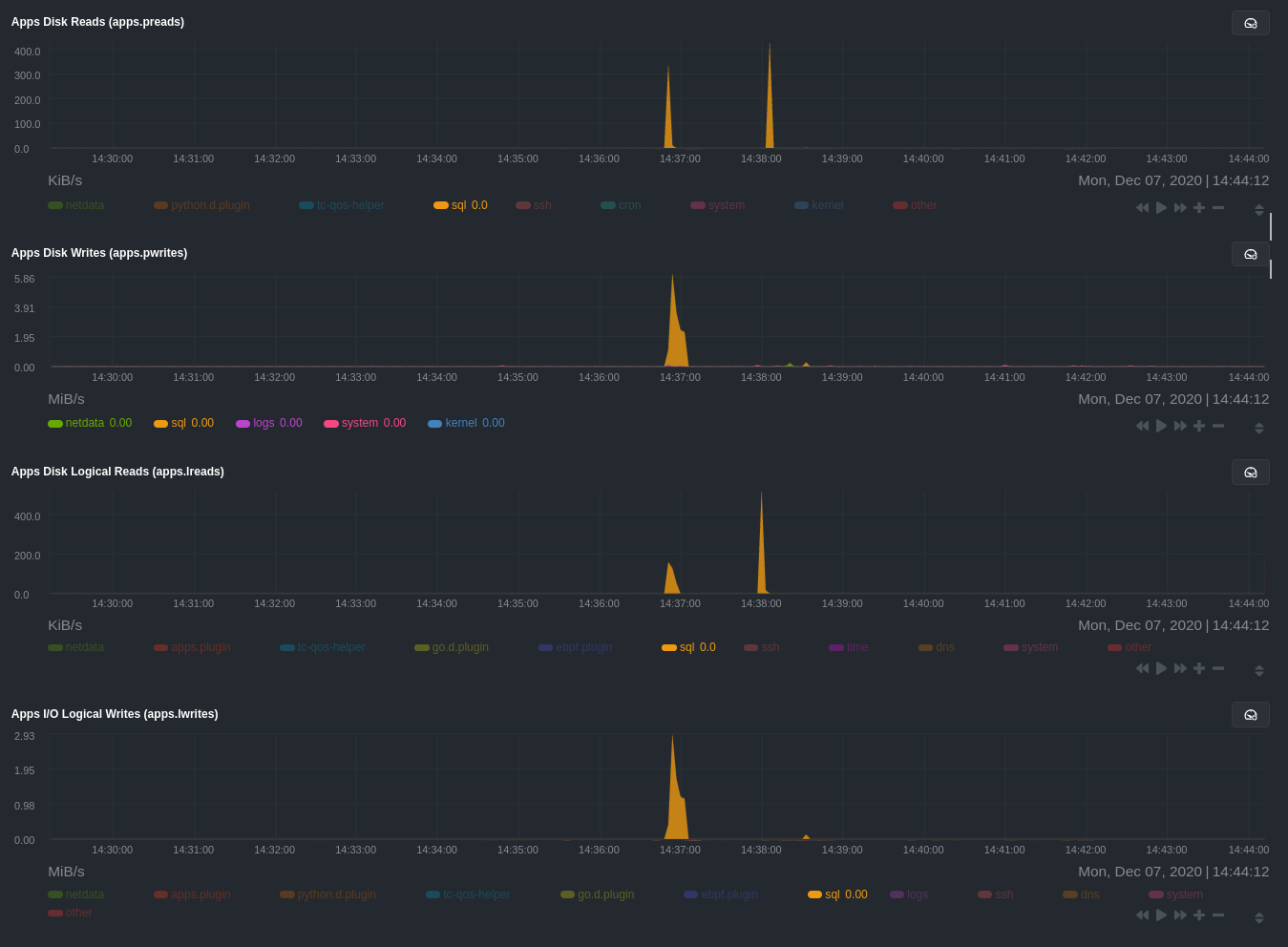 💡 Click on any dimension below a chart in Netdata Cloud (or to the right of a chart on a local Agent dashboard), to visualize only that dimension. This can be particularly useful in process monitoring to separate one process' utilization from the rest of the system.

Netdata's eBPF collector puts its charts in two places. Of most importance to process monitoring are the ebpf file, ebpf syscall, ebpf process, and ebpf net sub-sections under Applications, shown in the above screenshot.

For example, running the above workload shows the entire "story" how MySQL interacts with the Linux kernel to open processes/threads to handle a large number of SQL queries, then subsequently close the tasks as each query returns the relevant data. 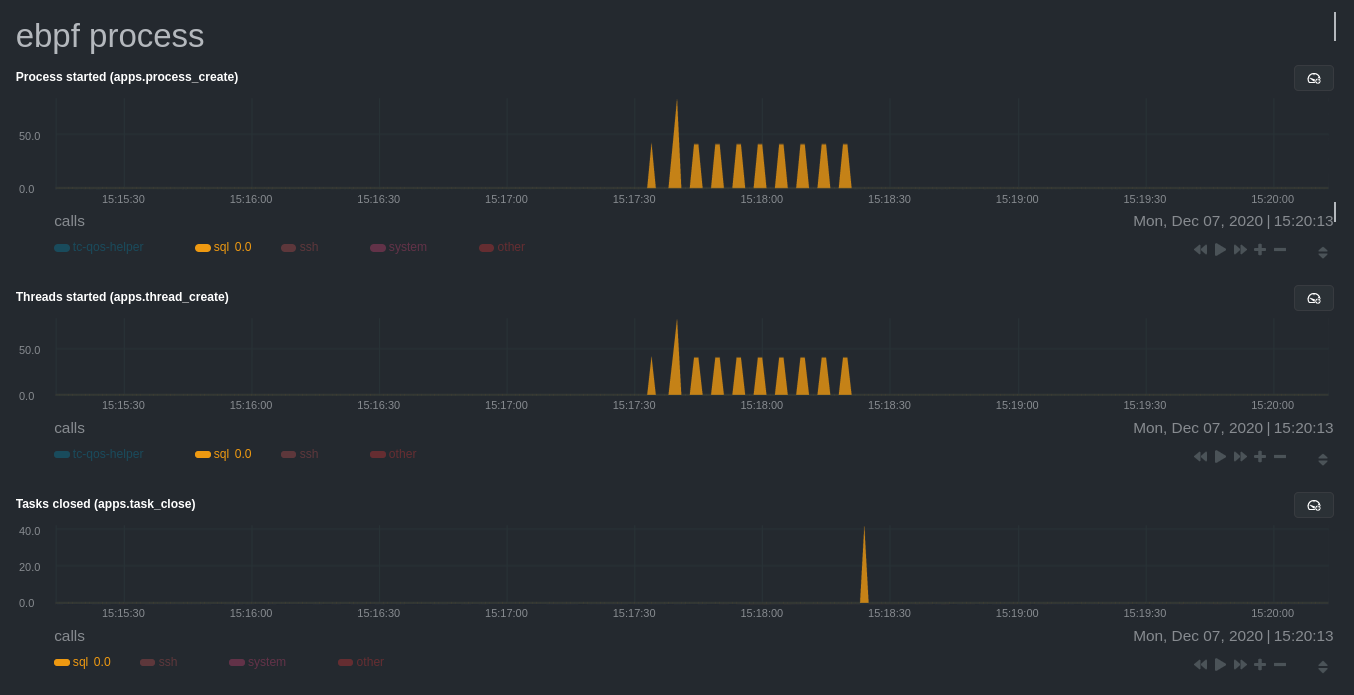 ebpf.plugin visualizes additional eBPF metrics, which are system-wide and not per-process, under the eBPF section.

Now that you have apps_groups.conf configured correctly, and know where to find per-process visualizations throughout Netdata's ecosystem, you can precisely monitor the health and performance of any process on your node using per-second metrics.

For even more in-depth troubleshooting, see our guide on monitoring and debugging applications with eBPF.

If the process you're monitoring also has a supported collector, now is a great time to set that up if it wasn't autodetected. With both process utilization and application-specific metrics, you should have every piece of data needed to discover the root cause of an incident. See our collector setup doc for details.

Try running Metric Correlations on a node that's running the process(es) you're monitoring. Even if nothing is going wrong at the moment, Netdata Cloud's embedded intelligence helps you better understand how a MySQL database, for example, might influence a system's volume of memory page faults. And when an incident is afoot, use Metric Correlations to reduce mean time to resolution (MTTR) and cognitive load.