This collector uses the Netdata rest api to get the mean and stddev for each dimension on specified charts over a time range (defined by train_secs and offset_secs). For each dimension it will calculate a Z-Score as z = (x - mean) / stddev (clipped at z_clip). Scores are then smoothed over time (z_smooth_n) and, if mode: 'per_chart', aggregated across dimensions to a smoothed, rolling chart level Z-Score at each time step.

Below is an example of the charts produced by this collector and a typical example of how they would look when things are 'normal' on the system. Most of the zscores tend to bounce randomly around a range typically between 0 to +3 (or -3 to +3 if z_abs: 'false'), a few charts might stay steady at a more constant higher value depending on your configuration and the typical workload on your system (typically those charts that do not change that much have a smaller range of values on which to calculate a zscore and so tend to have a higher typical zscore).

So really its a combination of the zscores values themselves plus, perhaps more importantly, how they change when something strange occurs on your system which can be most useful. 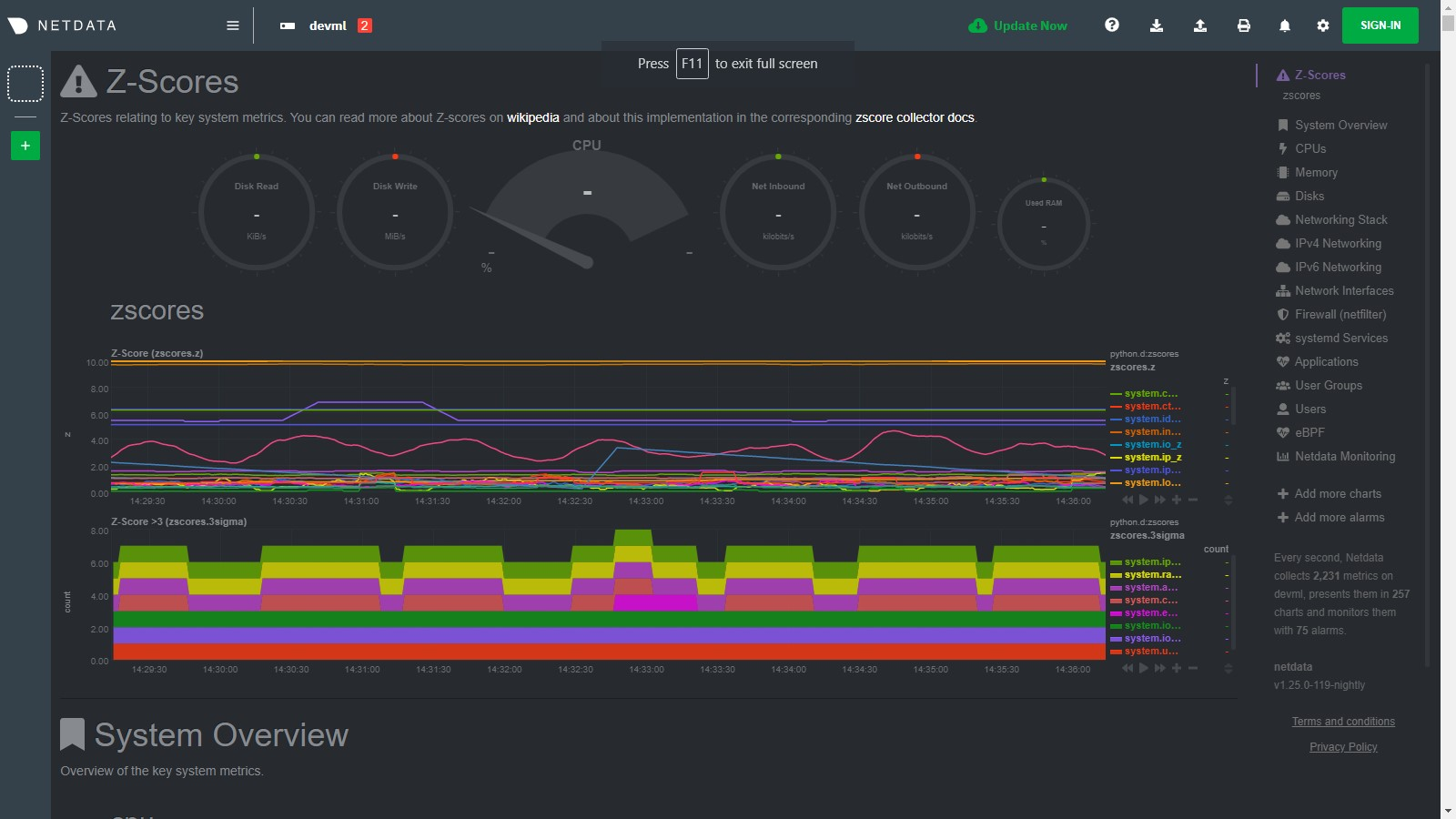 For example, if we go onto the system and run a command like stress-ng --all 2 to create some stress, we see many charts begin to have zscores that jump outside the typical range. When the absolute zscore for a chart is greater than 3 you will see a corresponding line appear on the zscores.3stddev chart to make it a bit clearer what charts might be worth looking at first (for more background information on why 3 stddev see here) .

In the example below we basically took a sledge hammer to our system so its not surprising that lots of charts light up after we run the stress command. In a more realistic setting you might just see a handful of charts with strange zscores and that could be a good indication of where to look first. 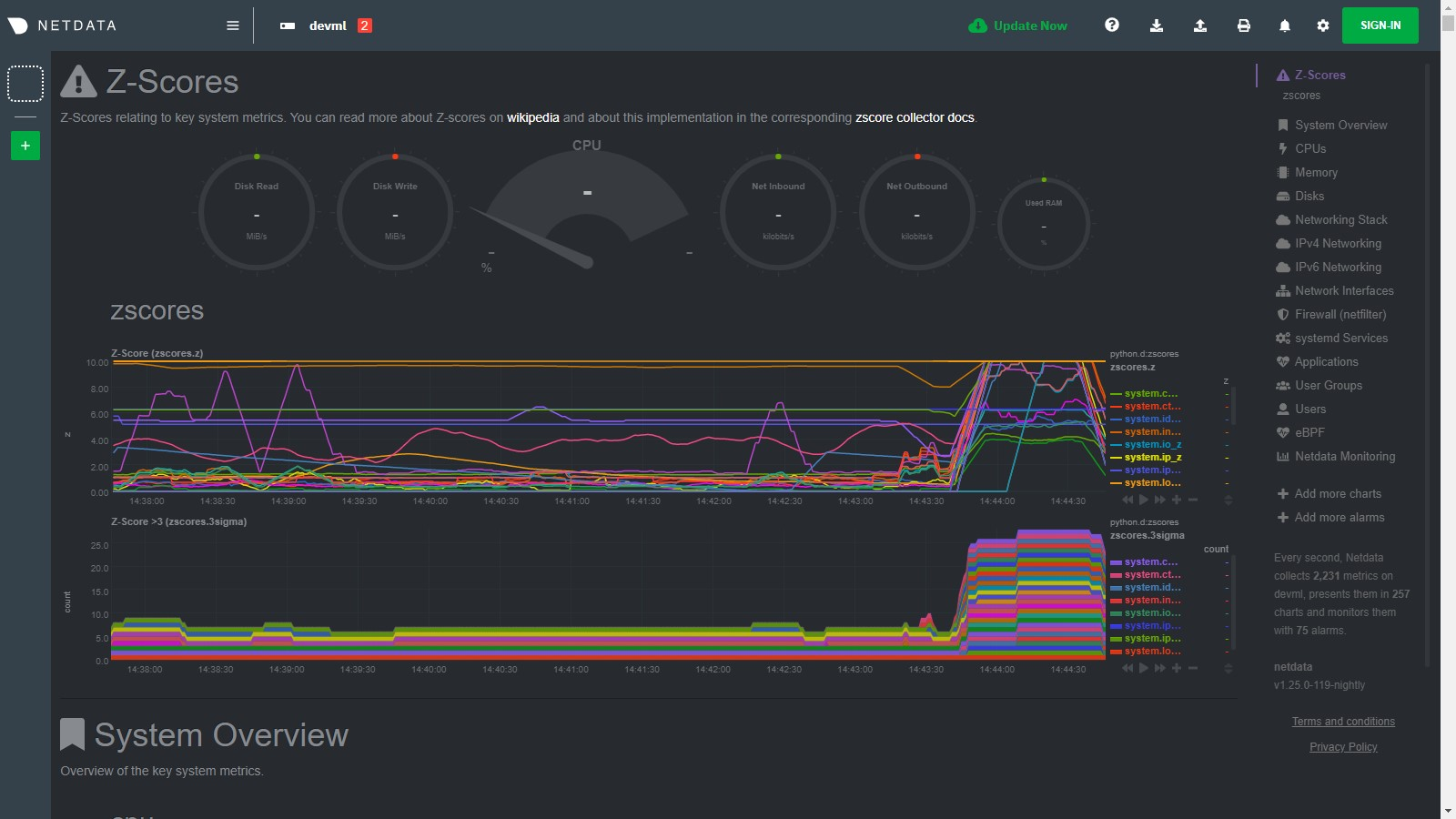 Then as the issue passes the zscores should settle back down into their normal range again as they are calculated in a rolling and smoothed way (as defined by your zscores.conf file). 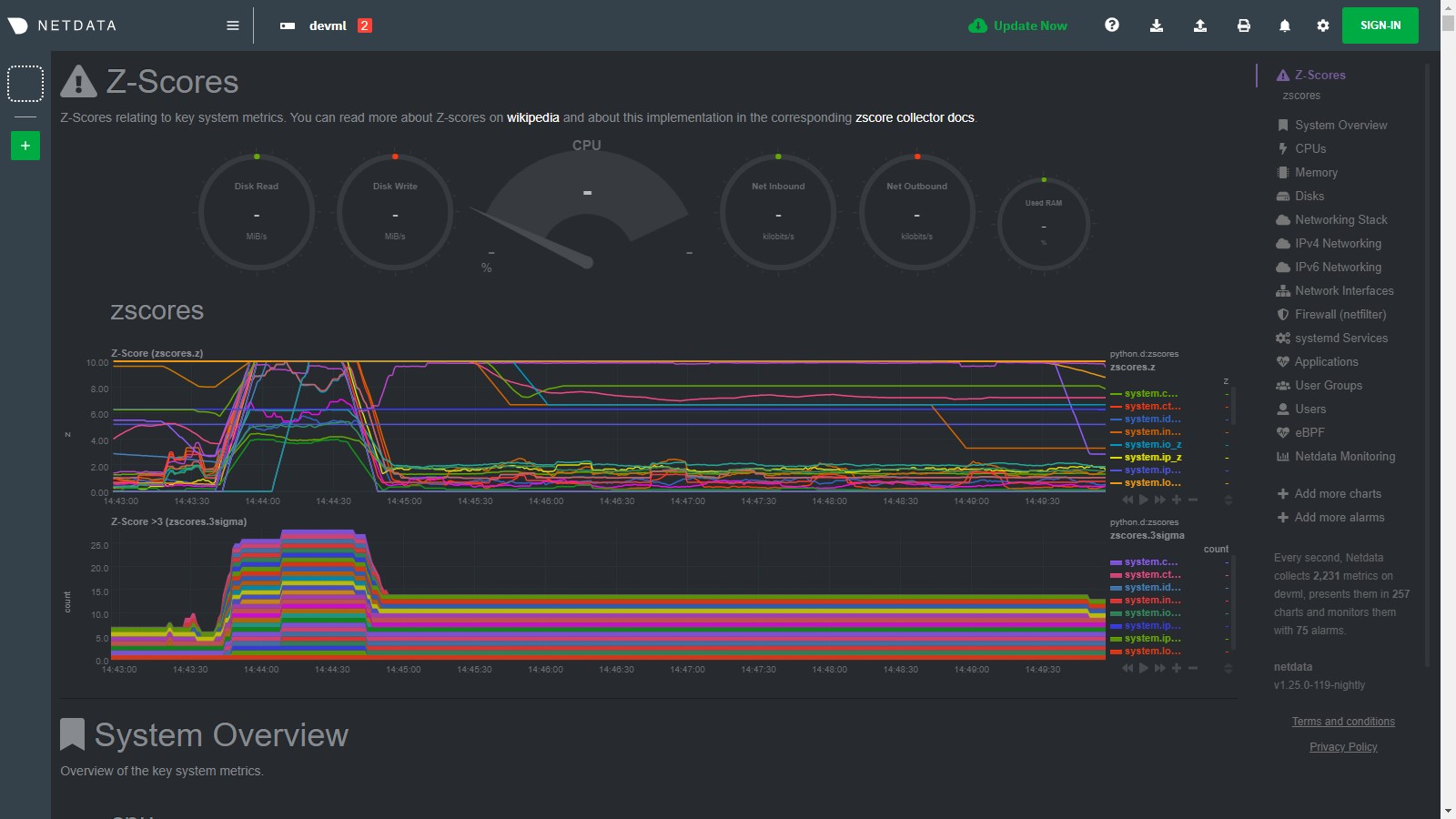 This collector will only work with Python 3 and requires the below packages be installed.

The configuration for the zscores collector defines how it will behave on your system and might take some experimentation with over time to set it optimally. Out of the box, the config comes with some sane defaults to get you started.

If you are unsure about any of the below configuration options then it's best to just ignore all this and leave the zscores.conf files alone to begin with. Then you can return to it later if you would like to tune things a bit more once the collector is running for a while.

Edit the python.d/zscores.conf configuration file using edit-config from the your agent's config directory, which is usually at /etc/netdata.

The default configuration should look something like this. Here you can see each parameter (with sane defaults) and some information about each one and what it does.