In the system directory you can find scripts and configurations for the various distros.

The installer already installs netdata.service if it detects a systemd system.

To install netdata.service by hand, run:

In the system directory you can find netdata-lsb. Copy it to the proper place according to your distribution documentation. For Ubuntu, this can be done via running the following commands as root.

In the system directory you can find netdata-openrc. Copy it to the proper place according to your distribution documentation.

For older versions of RHEL/CentOS that don't have systemd, an init script is included in the system directory. This can be installed by running the following commands as root.

There have been some recent work on the init script, see PR https://github.com/netdata/netdata/pull/403

You can start Netdata by running it from /etc/rc.local or equivalent.

Normally you don't need to supply any command line arguments to netdata.

If you do though, they override the configuration equivalent options.

To get a list of all command line parameters supported, run:

The program will print the supported command line parameters.

The command line options of the Netdata 1.10.0 version are the following:

You can send commands during runtime via netdatacli.

Any of them can be disabled by setting it to /dev/null or none in netdata.conf. By default error.log and access.log are enabled. debug.log is only enabled if debugging/tracing is also enabled (Netdata needs to be compiled with debugging enabled).

The error.log is the stderr of the netdata daemon and all external plugins run by netdata.

So if any process, in the Netdata process tree, writes anything to its standard error, it will appear in error.log.

For most Netdata programs (including standard external plugins shipped by netdata), the following lines may appear:

So, when auto-detection of data collection fail, ERROR lines are logged and the relevant modules are disabled, but the program continues to run.

When a Netdata program cannot run at all, a FATAL line is logged.

The access.log logs web requests. The format is:

Netdata runs with OOMScore = 1000. This means Netdata will be the first to be killed when your server runs out of memory.

Netdata logs its OOM score when it starts:

Netdata will not be able to lower its OOM Score below zero, when it is started as the netdata user (systemd case).

To allow Netdata control its OOM Score in such cases, you will need to edit netdata.service and set:

[Service]
# The minimum Netdata Out-Of-Memory (OOM) score.
# Netdata (via [global].OOM score in netdata.conf) can only increase the value set here.
# To decrease it, set the minimum here and set the same or a higher value in netdata.conf.
# Valid values: -1000 (never kill netdata) to 1000 (always kill netdata).
OOMScoreAdjust=-1000

If you want to control it entirely via systemd, you can set in netdata.conf:

Using the above, whatever OOM Score you have set at netdata.service will be maintained by netdata.

By default Netdata runs with the idle process scheduling policy, so that it uses CPU resources, only when there is idle CPU to spare. On very busy servers (or weak servers), this can lead to gaps on the charts.

You can use the following:

scheduling priority for rr and fifo#

Once the policy is set to one of rr or fifo, the following will appear:

These priorities are usually from 0 to 99. Higher numbers make the process more important.

nice level for policies other or batch#

When the policy is set to other, nice, or batch, the following will appear:

Netdata will not be able to set its scheduling policy and priority to more important values when it is started as the netdata user (systemd case).

You can set these settings at /etc/systemd/system/netdata.service:

[Service]
# By default Netdata switches to scheduling policy idle, which makes it use CPU, only
# when there is spare available.
# Valid policies: other (the system default) | batch | idle | fifo | rr
#CPUSchedulingPolicy=other
# This sets the maximum scheduling priority Netdata can set (for policies: rr and fifo).
# Netdata (via [global].process scheduling priority in netdata.conf) can only lower this value.
# Priority gets values 1 (lowest) to 99 (highest).
#CPUSchedulingPriority=1
# For scheduling policy 'other' and 'batch', this sets the lowest niceness of netdata.
# Netdata (via [global].process nice level in netdata.conf) can only increase the value set here.
#Nice=0

Now, tell Netdata to keep these settings, as set by systemd, by editing netdata.conf and setting:

Using the above, whatever scheduling settings you have set at netdata.service will be maintained by netdata.

On a system that is not based on systemd, to make Netdata run with nice level -1 (a little bit higher to the default for all programs), edit netdata.conf and set:

then execute this to restart Netdata:

On a system that is based on systemd, to make Netdata run with nice level -1 (a little bit higher to the default for all programs), edit netdata.conf and set:

Check this for example: A Netdata installation with default settings on Ubuntu 16.04LTS. The top chart is real memory used, while the bottom one is virtual memory:

Why does this happen?#

The system memory allocator allocates virtual memory arenas, per thread running. On Linux systems this defaults to 16MB per thread on 64 bit machines. So, if you get the difference between real and virtual memory and divide it by 16MB you will roughly get the number of threads running.

The system does this for speed. Having a separate memory arena for each thread, allows the threads to run in parallel in multi-core systems, without any locks between them.

This behaviour is system specific. For example, the chart above when running Netdata on Alpine Linux (that uses musl instead of glibc) is this: 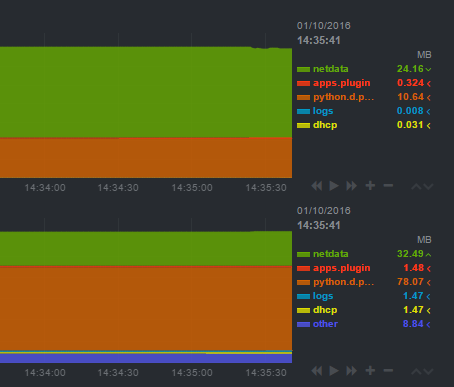 Can we do anything to lower it?#

However, even if we instructed the memory allocator to use just one arena, it seems it allocates an arena per thread.

Netdata also supports jemalloc and tcmalloc, however both behave exactly the same to the glibc memory allocator in this aspect.

Is this a problem?#

Linux reserves real memory (physical RAM) in pages (on x86 machines pages are 4KB each). So even if the system memory allocator is allocating huge amounts of virtual memory, only the 4KB pages that are actually used are reserving physical RAM. The real memory chart on Netdata application section, shows the amount of physical memory these pages occupy(it accounts the whole pages, even if parts of them are actually used).

When you compile Netdata with debugging:

Once Netdata is compiled with debugging and tracing is enabled for a few sections, the file /var/log/netdata/debug.log will contain the messages.

Do not forget to disable tracing (debug flags = 0) when you are done tracing. The file debug.log can grow too fast.

To compile Netdata with debugging, use this:

The above will compile and install Netdata with debugging info embedded. You can now use debug flags to set the section(s) you need to trace.

We have made the most to make Netdata crash free. If however, Netdata crashes on your system, it would be very helpful to provide stack traces of the crash. Without them, is will be almost impossible to find the issue (the code base is quite large to find such an issue by just observing it).

To provide stack traces, you need to have Netdata compiled with debugging. There is no need to enable any tracing (debug flags).

Then you need to be in one of the following 2 cases:

If you are not on these cases, you need to find a way to be (i.e. if your system does not produce core dumps, check your distro documentation to enable them).

Netdata crashes and you have a core dump#

Run the following command and post the output on a github issue.

you can reproduce a Netdata crash on your system#

Install the package valgrind and run:

Netdata will start and it will be a lot slower. Now reproduce the crash and valgrind will dump on your console the stack trace. Open a new github issue and post the output.