As of v1.32.0, Netdata comes with some ML powered anomaly detection capabilities built into it and available to use out of the box, with zero configuration required (ML was enabled by default in v1.35.0-29-nightly in this PR, previously it required a one line config change).

This means that in addition to collecting raw value metrics, the Netdata agent will also produce an anomaly-bit every second which will be 100 when recent raw metric values are considered anomalous by Netdata and 0 when they look normal. Once we aggregate beyond one second intervals this aggregated anomaly-bit becomes an "anomaly rate".

To be as concrete as possible, the below api call shows how to access the raw anomaly bit of the system.cpu chart from the london.my-netdata.io Netdata demo server. Passing options=anomaly-bit returns the anomay bit instead of the raw metric value.

If we aggregate the above to just 1 point by adding points=1 we get an "Anomaly Rate":

The fundamentals of Netdata's anomaly detection approach and implmentation are covered in lots more detail in the agent ML documentation.

This guide will explain how to get started using these ML based anomaly detection capabilities within Netdata.

The Anomaly Advisor is the flagship anomaly detection feature within Netdata. In the "Anomalies" tab of Netdata you will see an overall "Anomaly Rate" chart that aggregates node level anomaly rate for all nodes in a space. The aim of this chart is to make it easy to quickly spot periods of time where the overall "node anomaly rate" is evelated in some unusual way and for what node or nodes this relates to.

Once an area on the Anomaly Rate chart is highlighted netdata will append a "heatmap" to the bottom of the screen that shows which metrics were more anomalous in the highlighted timeframe. Each row in the heatmap consists of an anomaly rate sparkline graph that can be expanded to reveal the raw underlying metric chart for that dimension. 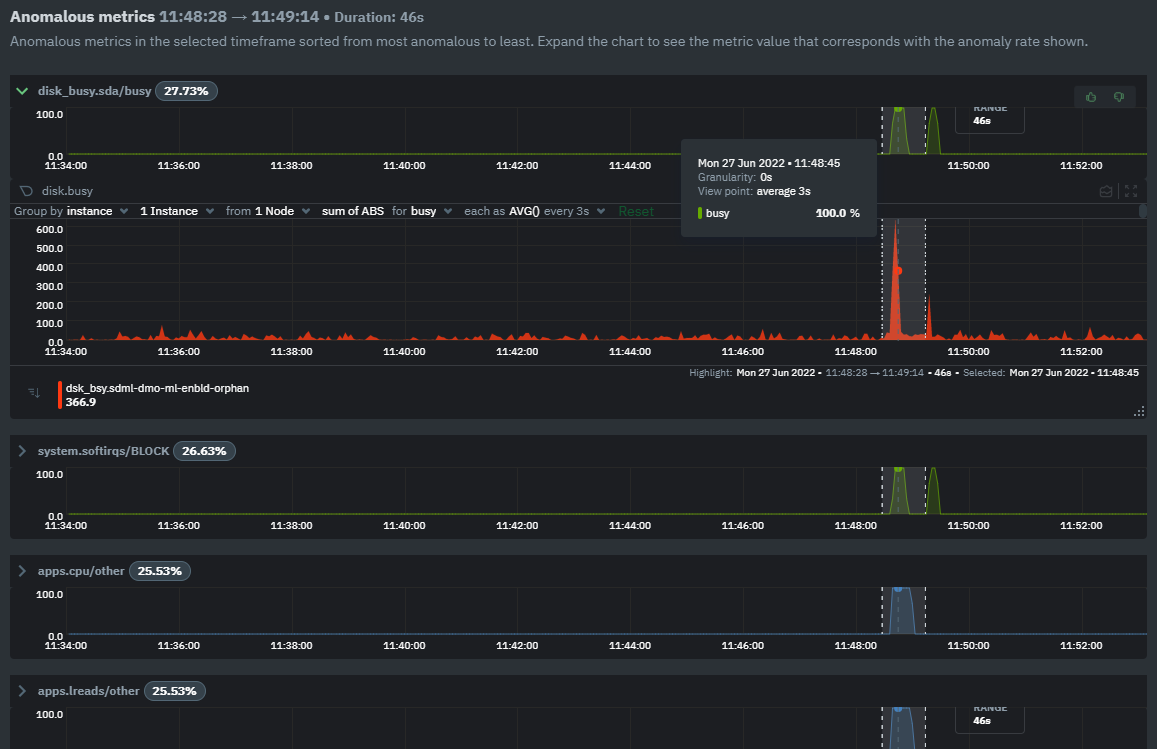 Charts in both the Overview and single node dashboard tabs also expose the underlying anomaly rates for each dimension so users can easily see if the raw metrics are considered anomalous or not by Netdata.

It is possible to use the anomaly-bit when defining traditional Alerts within netdata. The anomaly-bit is just another options parameter that can be passed as part of an alarm line lookup.

You can see some example ML based alert configurations below:

Check out the resources below to learn more about how Netdata is approaching ML: