This document details how to install Netdata on an existing Kubernetes (k8s) cluster. By following these directions, you will use Netdata's Helm chart to bootstrap a Netdata deployment on your cluster. The Helm chart installs one parent pod for storing metrics and managing alarm notifications plus an additional child pod for every node in the cluster.

To install Netdata on a Kubernetes cluster, you need:

The default configuration creates one parent pod, installed on one of your cluster's nodes, and a DaemonSet for additional child pods. This DaemonSet ensures that every node in your k8s cluster also runs a child pod, including the node that also runs parent. The child pods collect metrics and stream the information to the parent pod, which uses two persistent volumes to store metrics and alarms. The parent pod also handles alarm notifications and enables the Netdata dashboard using an ingress controller.

We recommend you install the Helm chart using our Helm repository. In the helm install command, replace netdata with the release name of your choice.

You can also install the Netdata Helm chart by cloning the repository and manually running Helm against the included chart.

Run kubectl get services and kubectl get pods to confirm that your cluster now runs a netdata service, one parent pod, and three child pods.

You've now installed Netdata on your Kubernetes cluster. See how to access the Netdata dashboard to confirm it's working as expected, or see the next section to configure the Helm chart to suit your cluster's particular setup.

Read up on the various configuration options in the Helm chart documentation to see if you need to change any of the options based on your cluster's setup.

To change a setting, use the --set or --values arguments with helm install, for the initial deployment, or helm upgrade to upgrade an existing deployment.

For example, to change the size of the persistent metrics volume on the parent node:

Service discovery scans your cluster for pods exposed on certain ports and with certain image names. By default, it looks for its supported services on the ports they most commonly listen on, and using default image names. Service discovery currently supports popular applications, plus any endpoints covered by our generic Prometheus collector.

If you haven't changed listening ports, image names, or other defaults, service discovery should find your pods, create the proper configurations based on the service that pod runs, and begin monitoring them immediately after depolyment.

However, if you have changed some of these defaults, you need to copy a file from the Netdata Helm chart repository, make your edits, and pass the changed file to helm install/helm upgrade.

First, copy the file to your administrative system.

Edit the new child.yml file according to your needs. See the Helm chart configuration and the file itself for details.

You can then run helm install/helm upgrade with the --set-file argument to use your configured child.yml file instead of the default, changing the path if you copied it elsewhere.

Your configured service discovery is now pushed to your cluster.

Accessing the Netdata dashboard itself depends on how you set up your k8s cluster and the Netdata Helm chart. If you installed the Helm chart with the default service.type=ClusterIP, you will need to forward a port to the parent pod.

You can now access the dashboard at http://CLUSTER:19999, replacing CLUSTER with the IP address or hostname of your k8s cluster.

If you set up the Netdata Helm chart with service.type=LoadBalancer, you can find the external IP for the load balancer with kubectl get services, under the EXTERNAL-IP column.

You can claim a cluster's parent Netdata pod to see its real-time metrics alongside any other nodes you monitor using Netdata Cloud.

Netdata Cloud does not currently support claiming child nodes because the Helm chart does not allocate a persistent volume for them.

Ensure persistence is enabled on the parent pod by running the following helm upgrade command.

Next, find your claiming script in Netdata Cloud by clicking on your Space's dropdown, then Manage your Space. Click the Nodes tab. Netdata Cloud shows a script similar to the following:

Run the following helm upgrade command after replacing TOKEN and ROOM1,ROOM2 with the values found in the claiming script from Netdata Cloud. The quotations are required.

The cluster terminates the old parent pod and creates a new one with the proper claiming configuration. You can see your parent pod in Netdata Cloud after a few moments. You can now build new dashboards using the parent pod's metrics or run Metric Correlations to troubleshoot anomalies. 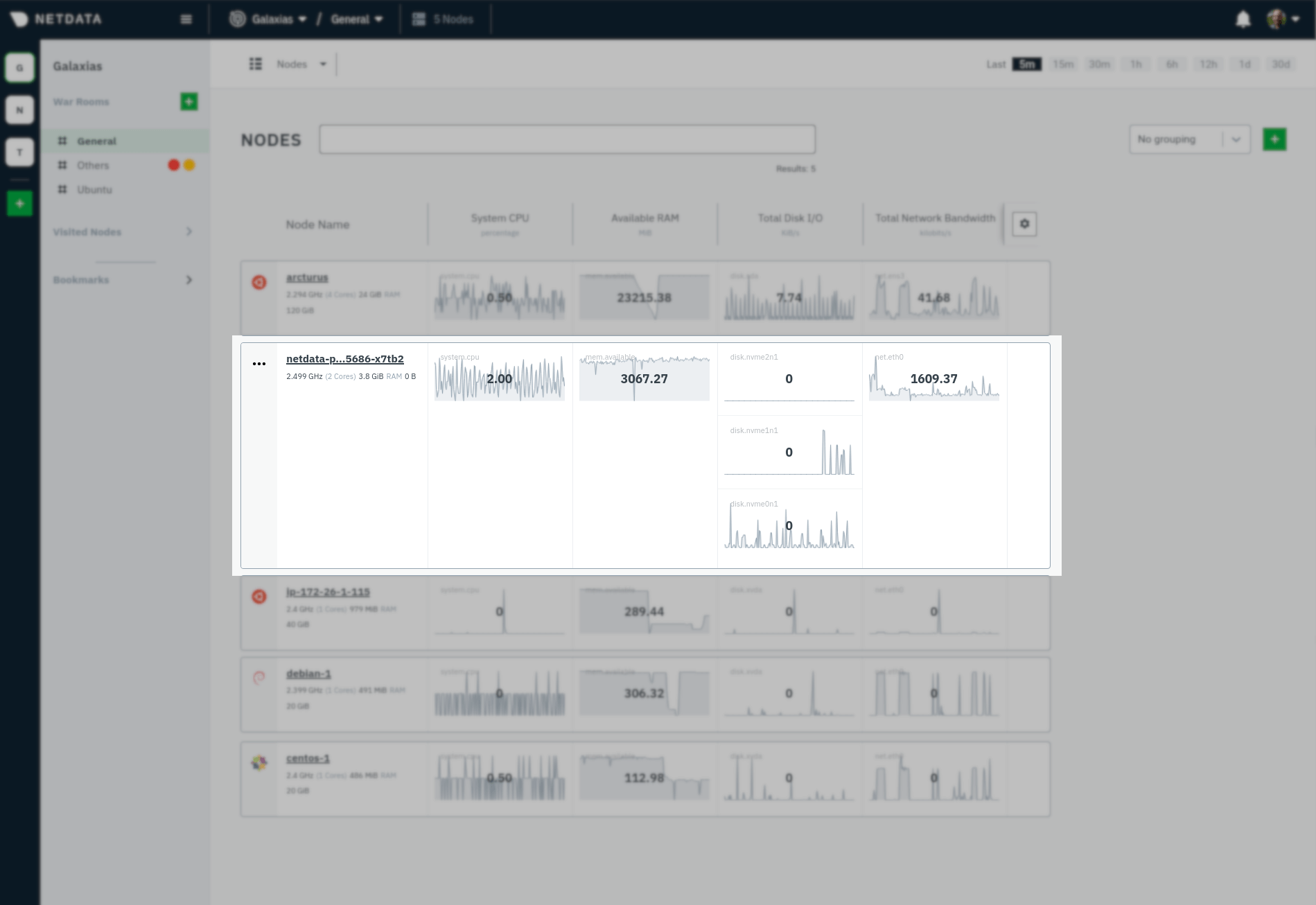 If you update the Helm chart's configuration, run helm upgrade to redeploy your Netdata service, replacing netdata with the name of the release, if you changed it upon installtion:

Read the monitoring a Kubernetes cluster guide for details on the various metrics and charts created by the Helm chart and some best practices on real-time troubleshooting using Netdata.

Check out our infrastructure for details about additional k8s monitoring features, and learn more about configuring the Netdata Agent to better understand the settings you might be interested in changing.

To futher configure Netdata for your cluster, see our Helm chart repository and the service discovery repository.