Beginning with v1.27, the open-source Netdata Agent is capable of unsupervised anomaly detection with machine learning (ML). As with all things Netdata, the anomalies collector comes with preconfigured alarms and instant visualizations that require no query languages or organizing metrics. You configure the collector to look at specific charts, and it handles the rest.

Netdata's implementation uses a handful of functions in the Python Outlier Detection (PyOD) library, which periodically runs a train function that learns what "normal" looks like on your node and creates an ML model for each chart, then utilizes the predict_proba() and predict() PyOD functions to quantify how anomalous certain charts are.

All these metrics and alarms are available for centralized monitoring in Netdata Cloud. If you choose to sign up for Netdata Cloud and connect your nodes, you will have the ability to run tailored anomaly detection on every node in your infrastructure, regardless of its purpose or workload.

In this guide, you'll learn how to set up the anomalies collector to instantly detect anomalies in an Nginx web server and/or the node that hosts it, which will give you the tools to configure parallel unsupervised monitors for any application in your infrastructure. Let's get started. 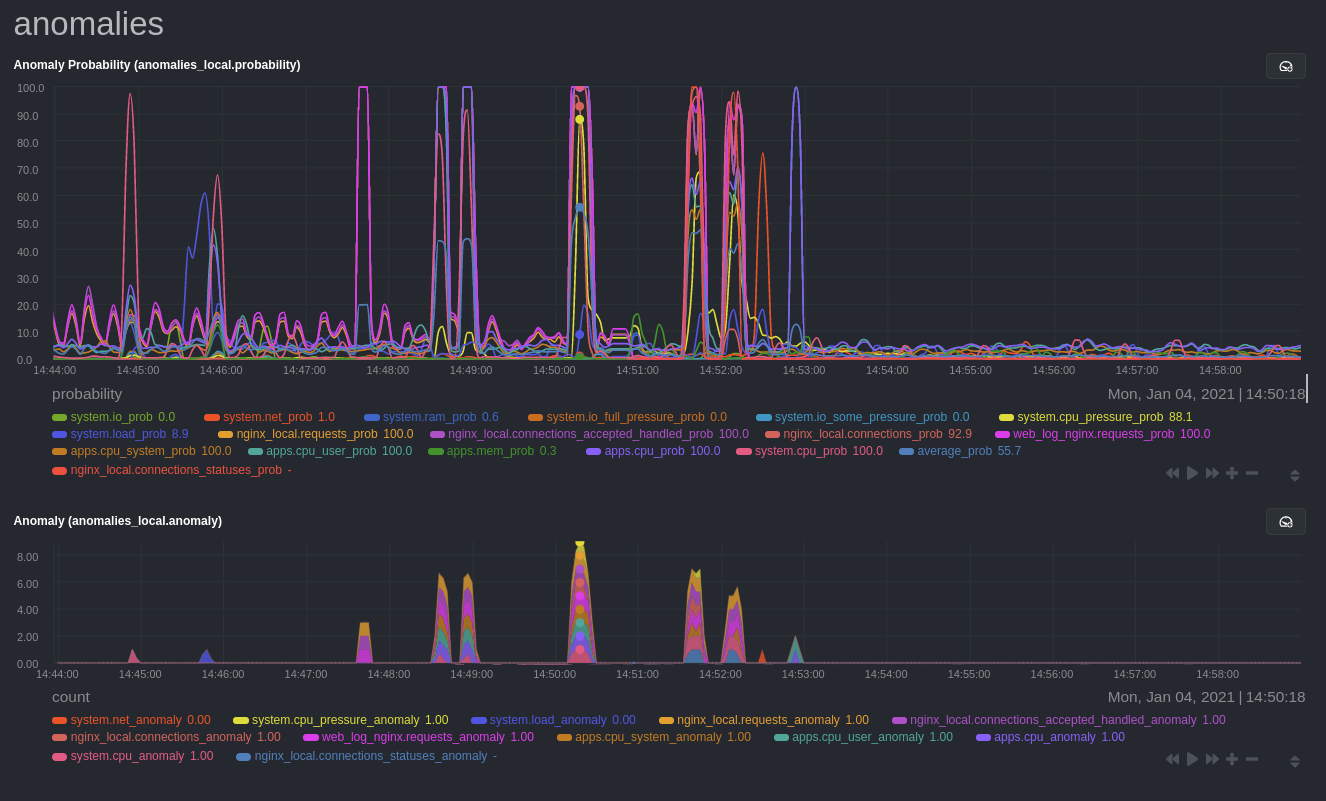 The anomalies collector uses a few Python packages, available with pip3, to run ML training. It requires numba, scikit-learn, pyod, in addition to netdata-pandas, which is a package built by the Netdata team to pull data from a Netdata Agent's API into a Pandas. Read more about netdata-pandas on its package repo or in Netdata's community repo.

If the pip3 command fails, you need to install it. For example, on an Ubuntu system, use sudo apt install python3-pip.

Use exit to become your normal user again.

Navigate to your Netdata config directory and use edit-config to open the python.d.conf file.

In python.d.conf file, search for the anomalies line. If the line exists, set the value to yes. Add the line yourself if it doesn't already exist. Either way, the final result should look like:

Restart the Agent with sudo systemctl restart netdata, or the appropriate method for your system, to start up the anomalies collector. By default, the model training process runs every 30 minutes, and uses the previous 4 hours of metrics to establish a baseline for health and performance across the default included charts.

💡 The anomaly collector may need 30-60 seconds to finish its initial training and have enough data to start generating anomaly scores. You may need to refresh your browser tab for the Anomalies section to appear in menus on both the local Agent dashboard or Netdata Cloud.

The file contains many user-configurable settings with sane defaults. Here are some important settings that don't involve tweaking the behavior of the ML training itself.

⚠️ Setting charts_regex with many charts or train_n_secs to a very large number will have an impact on the resources and time required to train a model for every chart. The actual performance implications depend on the resources available on your node. If you plan on changing these settings beyond the default, or what's mentioned in this guide, make incremental changes to observe the performance impact. Considering train_max_n to cap the number of observations actually used to train on.

As mentioned above, this guide uses an Nginx web server to demonstrate how the anomalies collector works. You must configure the collector to monitor charts from the Nginx and web log collectors.

charts_regex allows for some basic regex, such as wildcards (*) to match all contexts with a certain pattern. For example, system\..* matches with any chart with a context that begins with system., and ends in any number of other characters (.*). Note the escape character (\) around the first period to capture a period character exactly, and not any character.

This value tells the anomaly collector to train against every system. chart, every nginx_local chart, every web_log_nginx chart, and specifically the apps.cpu and apps.mem charts.

Remove some metrics from anomaly detection​

As you can see in the above screenshot, this node is now looking for anomalies in many places. The result is a single anomalies_local.probability chart with more than twenty dimensions, some of which the dashboard hides at the bottom of a scrollable area. In addition, training and analyzing the anomaly collector on many charts might require more CPU utilization that you're willing to give.

First, explicitly declare which system. charts to monitor rather than of all of them using regex (system\..*).

Next, remove some charts with the charts_to_exclude setting. For this example, using an Nginx web server, focus on the volume of requests/responses, not, for example, which type of 4xx response a user might receive.

Apply the ideas behind the collector's regex and exclude settings to any other system, container, or application metrics you want to detect anomalies for.

Now that you know how to set up unsupervised anomaly detection in the Netdata Agent, using an Nginx web server as an example, it's time to apply that knowledge to other mission-critical parts of your infrastructure. If you're not sure what to monitor next, check out our list of collectors to see what kind of metrics Netdata can collect from your systems, containers, and applications.

Keep on moving to part 2, which covers the charts and alarms Netdata creates for unsupervised anomaly detection.

For a different troubleshooting experience, try out the Metric Correlations feature in Netdata Cloud. Metric Correlations helps you perform faster root cause analysis by narrowing a dashboard to only the charts most likely to be related to an anomaly.