While Kubernetes (k8s) might simplify the way you deploy, scale, and load-balance your applications, not all clusters come with "batteries included" when it comes to monitoring. Doubly so for a monitoring stack that helps you actively troubleshoot issues with your cluster.

Some k8s providers, like GKE (Google Kubernetes Engine), do deploy clusters bundled with monitoring capabilities, such as Google Stackdriver Monitoring. However, these pre-configured solutions might not offer the depth of metrics, customization, or integration with your perferred alerting methods.

Without this visibility, it's like you built an entire house and then smashed your way through the finished walls to add windows.

At Netdata, we're working to build Kubernetes monitoring tools that add visibility without complexity while also helping you actively troubleshoot anomalies or outages. Better yet, this toolkit includes a few complementary collectors that let you monitor the many layers of a Kubernetes cluster entirely for free.

We already have a few complementary tools and collectors for monitoring the many layers of a Kubernetes cluster, entirely for free. These methods work together to help you troubleshoot performance or availablility issues across your k8s infrastructure.

By following this guide, you'll learn how to discover, explore, and take away insights from each of these layers in your Kubernetes cluster. Let's get started.

You need to install the Netdata Helm chart on your cluster before you proceed. See our Kubernetes installation process for details.

This guide uses a 3-node cluster, running on Digital Ocean, as an example. This cluster runs CockroachDB, Redis, and Apache, which we'll use as examples of how to monitor a Kubernetes cluster with Netdata.

The Helm chart installs and enables everything you need for visibility into your k8s cluster, including the service discovery plugin, Kubelet collector, kube-proxy collector, and cgroups collector.

To get started, open your browser and navigate to your cluster's Netdata dashboard. See our Kubernetes installation instructions for how to access the dashboard based on your cluster's configuration.

You'll see metrics from the parent pod as soon as you navigate to the dashboard: 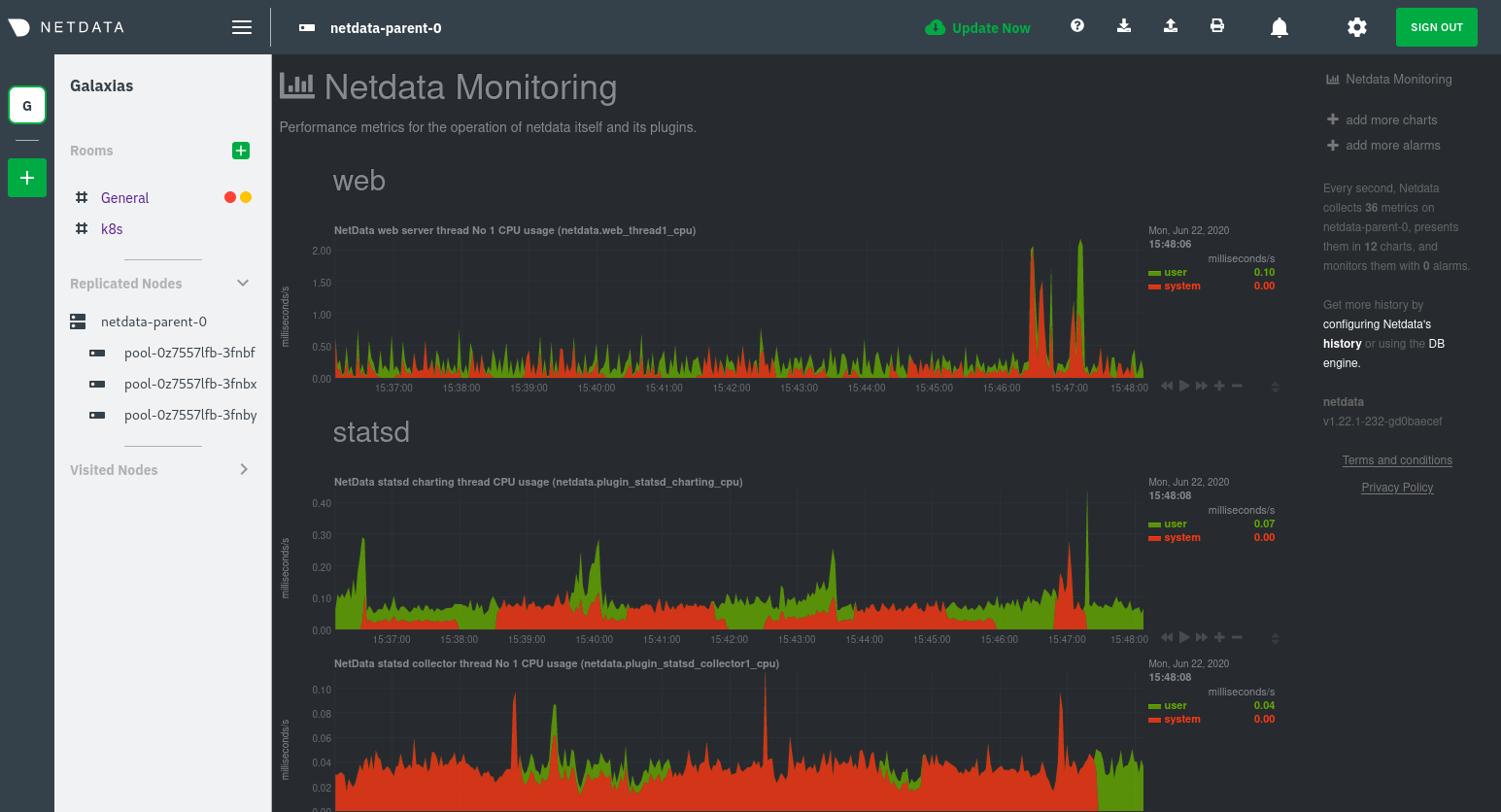 Remember that the parent pod is responsible for storing metrics from all the child pods and sending alarms.

You'll use the links in the Replicated Nodes menu to navigate between the various pods in your cluster. Let's do that now to explore the pod-level Kubernetes monitoring Netdata delivers.

Click on any of the nodes under netdata-parent-0. Netdata redirects you to a separate instance of the Netdata dashboard, run by the Netdata child pod, which visualizes thousands of metrics from that node. 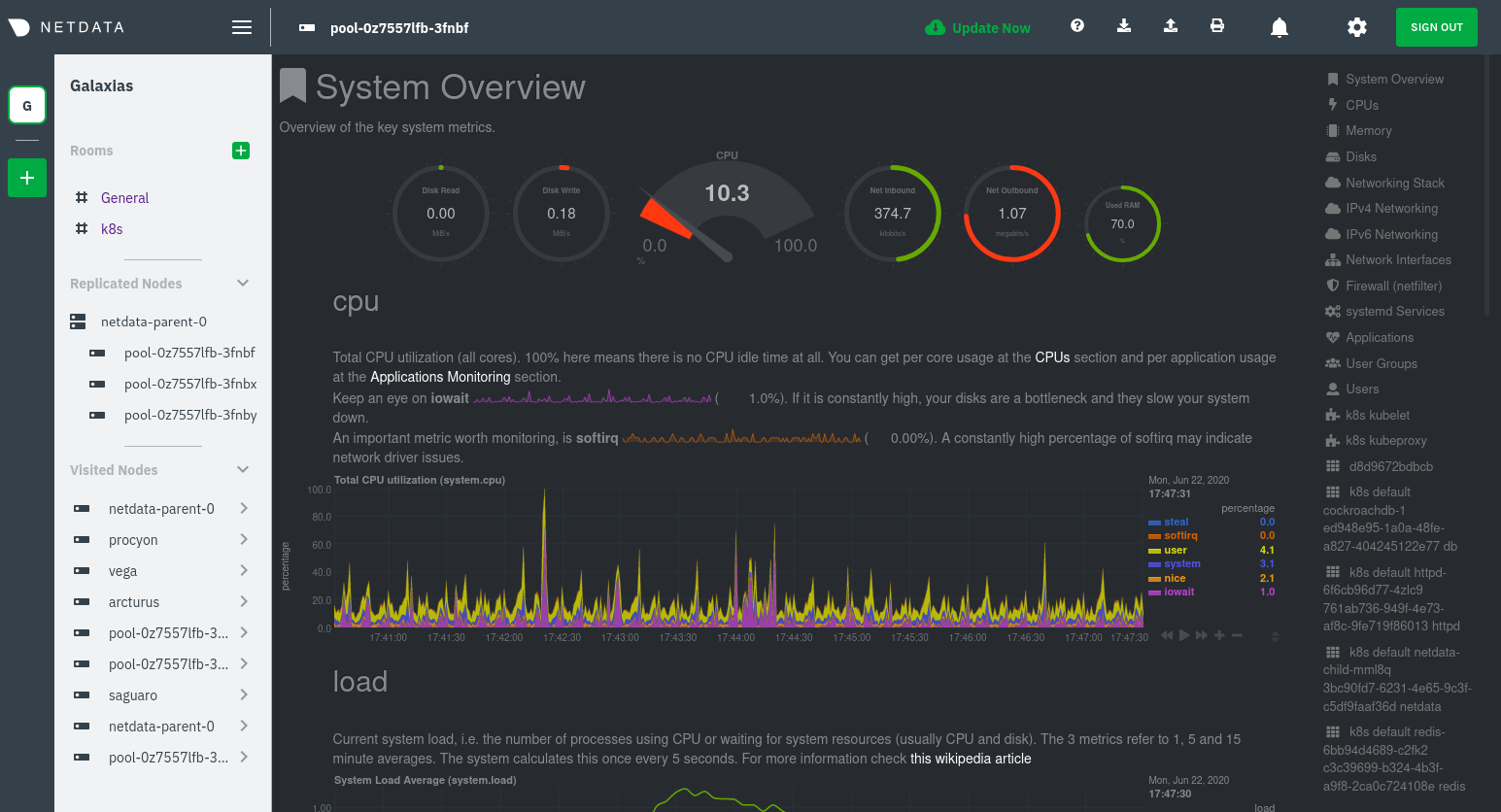 From this dashboard, you can see all the familiar charts showing the health and performance of an individual node, just like you would if you installed Netdata on a single physical system. Explore CPU, memory, bandwidth, networking, and more.

You can use the menus on the right-hand side of the dashboard to navigate between different sections of charts and metrics.

For example, click on the Applications section to view per-application metrics, collected by apps.plugin. The first chart you see is Apps CPU Time (100% = 1 core) (apps.cpu), which shows the CPU utilization of various applications running on the node. You shouldn't be surprised to find Netdata processes (netdata, sd-agent, and more) alongside Kubernetes processes (kubelet, kube-proxy, and containers).

Beneath the Applications section, you'll begin to see sections for k8s kubelet, k8s kubeproxy, and long strings that start with k8s, which are sections for metrics collected by cgroups.plugin. Let's skip over those for now and head further down to see Netdata's service discovery in action.

Thanks to Netdata's service discovery feature, you monitor containerized applications running in k8s pods with zero configuration or manual intervention. Service discovery is like a watchdog for created or deleted pods, recognizing the service they run based on the image name and port and immediately attempting to apply a logical default configuration.

Service configuration supports popular applications, plus any endpoints covered by our generic Prometheus collector, which are automatically added or removed from Netdata as soon as the pods are created or destroyed. 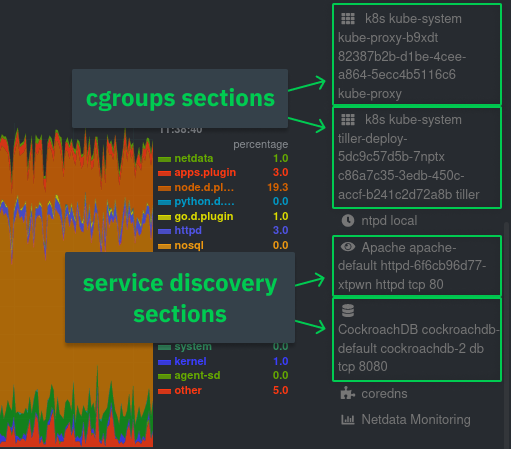 For example, the first service discovery section shows metrics for a pod running an Apache web server running on port 80 in a pod named httpd-6f6cb96d77-xtpwn.

Click on any of these service discovery sections to see metrics from that particular service. For example, click on the Apache apache-default httpd-6f6cb96d77-xtpwn httpd tcp 80 section brings you to a series of charts populated by the Apache collector itself.

With service discovery, you can now see valuable metrics like requests, bandwidth, workers, and more for this pod. 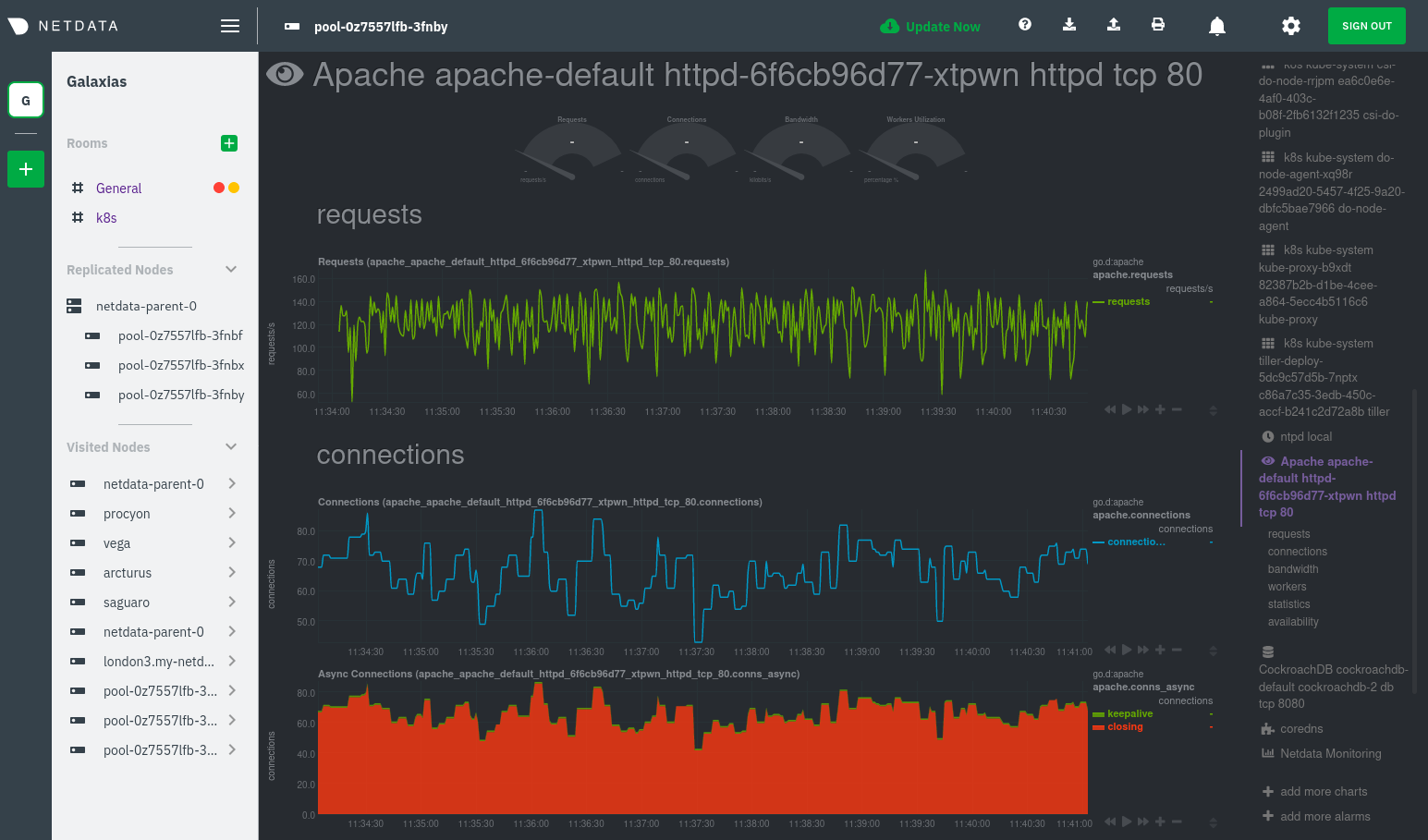 The same goes for metrics coming from the CockroachDB pod running on this same node. 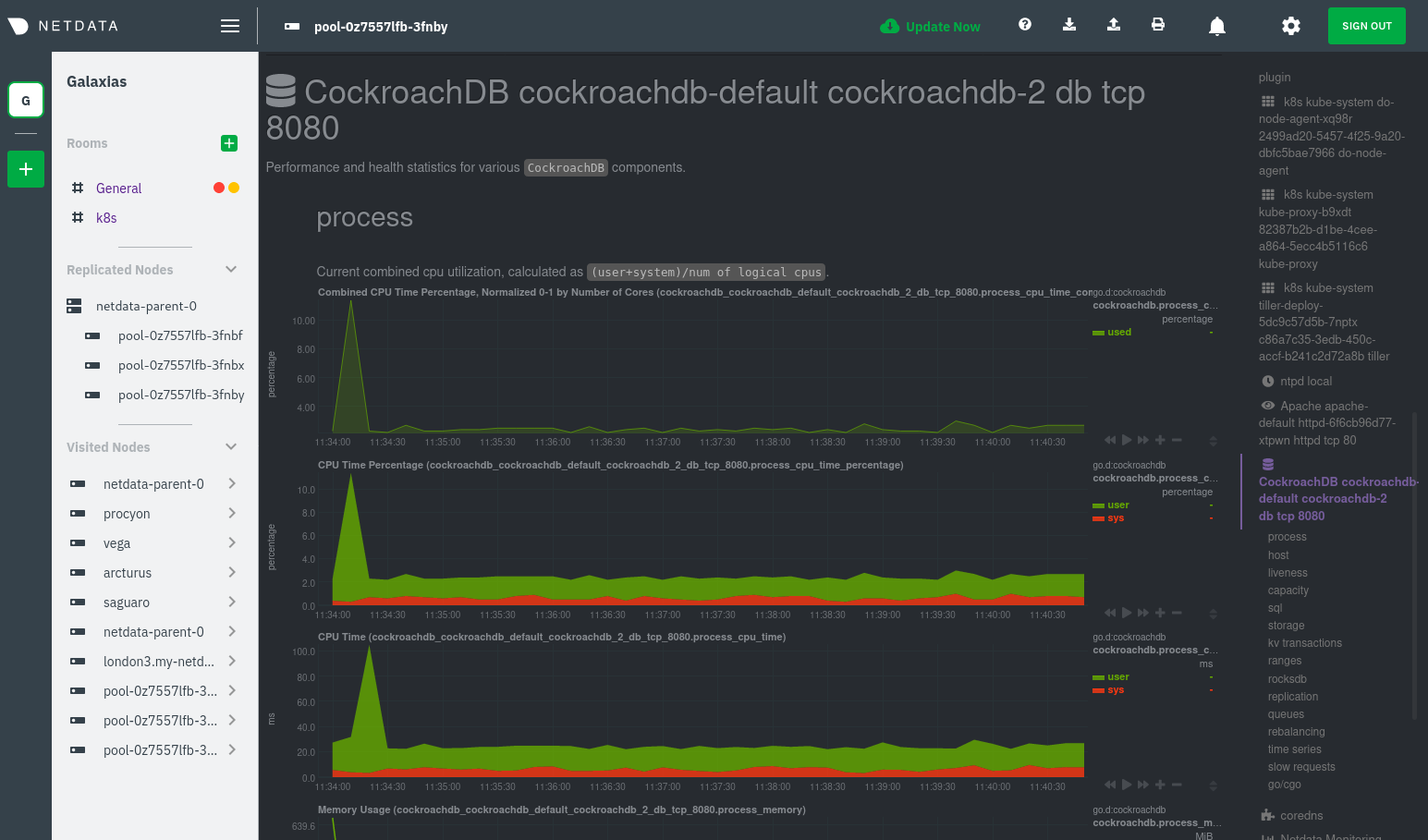 Service discovery helps you monitor the health of specific applications running on your Kubernetes cluster, which in turn gives you a complete resource when troubleshooting your infrastructure's health and performance.

Let's head back up the menu to the k8s kubelet section. Kubelet is an agent that runs on every node in a cluster. It receives a set of PodSpecs from the Kubernetes Control Plane and ensures the pods described there are both running and healthy. Think of it as a manager for the various pods on that node.

Monitoring each node's Kubelet can be invaluable when diagnosing issues with your Kubernetes cluster. For example, you can see when the volume of running containers/pods has dropped.

This drop might signal a fault or crash in a particular Kubernetes service or deployment (see kubectl get services or kubectl get deployments for more details). If the number of pods increases, it may be because of something more benign, like another member of your team scaling up a service with kubectl scale.

You can also view charts for the Kubelet API server, the volume of runtime/Docker operations by type, configuration-related errors, and the actual vs. desired numbers of volumes, plus a lot more.

Kubelet metrics are collected and visualized thanks to the kubelet collector, which is enabled with zero configuration on most Kubernetes clusters with standard configurations.

Scroll down into the k8s kubeproxy section to see metrics about the network proxy that runs on each node in your Kubernetes cluster. kube-proxy allows for pods to communicate with each other and accept sessions from outside your cluster.

With Netdata, you can monitor how often your k8s proxies are syncing proxy rules between nodes. Dramatic changes in these figures could indicate an anomaly in your cluster that's worthy of further investigation.

kube-proxy metrics are collected and visualized thanks to the kube-proxy collector, which is enabled with zero configuration on most Kubernetes clusters with standard configurations.

You can find these sections beneath Users, k8s kubelet, and k8s kubeproxy. Below, a number of containers devoted to running services like CockroachDB, Apache, Redis, and more. 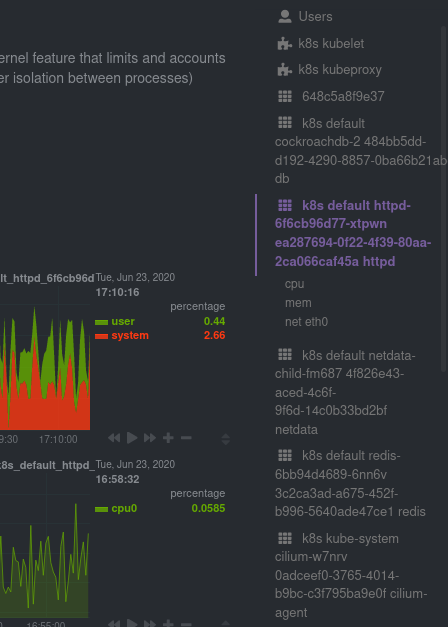 Let's look at the section devoted to the container that runs the Apache pod named httpd-6f6cb96d77-xtpwn, as described in the previous part on service discovery. 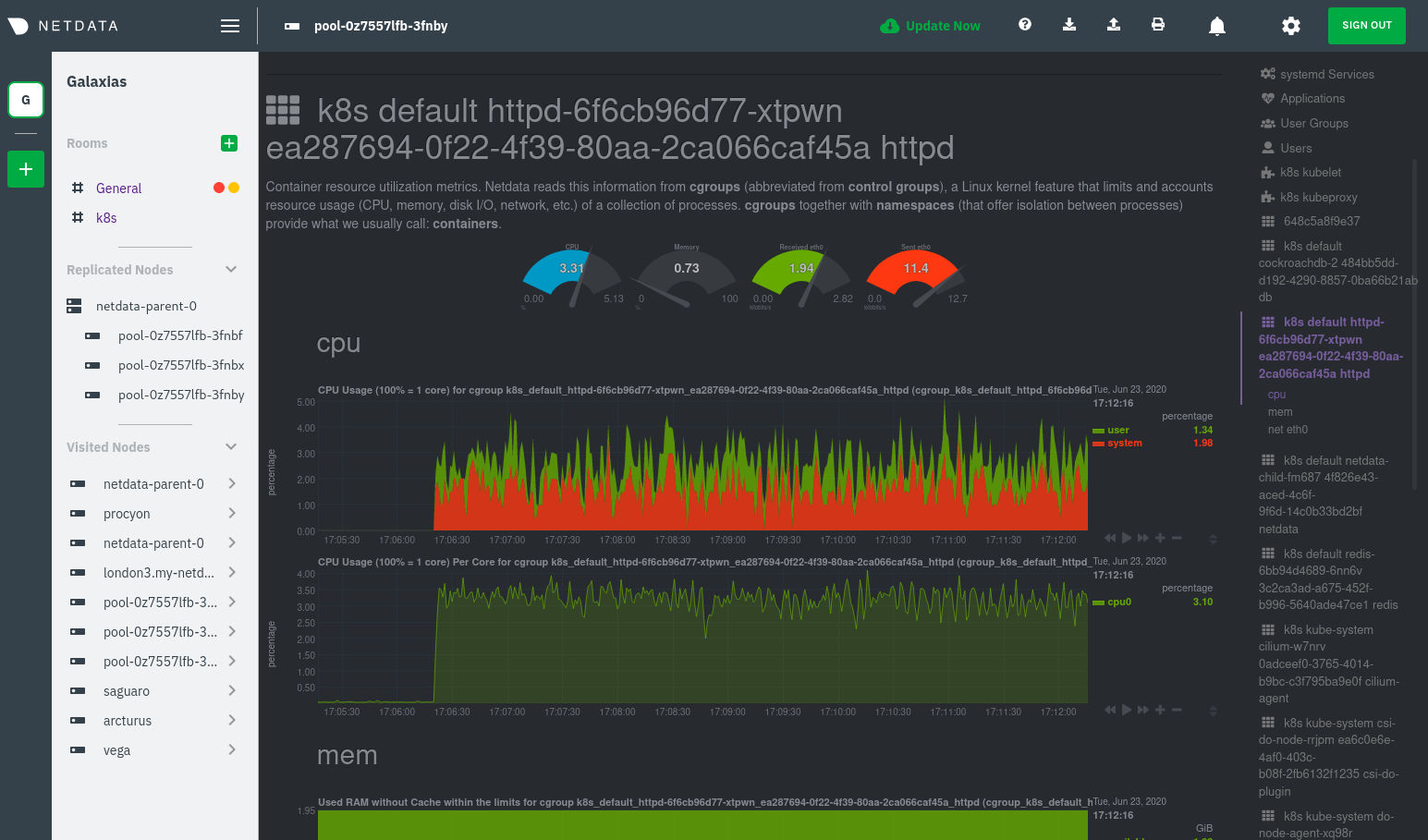 At first glance, these sections might seem redundant. You might ask, "Why do I need both a service discovery section and a container section? It's just one pod, after all!"

The difference is that while the service discovery section shows Apache metrics, the equivalent cgroups section shows that container's CPU, memory, and bandwidth usage. You can use the two sections in conjunction to monitor the health and performance of your pods and the services they run.

For example, let's say you get an alarm notification from netdata-parent-0 saying the ea287694-0f22-4f39-80aa-2ca066caf45a container (also known as the httpd-6f6cb96d77-xtpwn pod) is using 99% of its available RAM. You can then hop over to the Apache apache-default httpd-6f6cb96d77-xtpwn httpd tcp 80 section to further investigate why Apache is using an unexpected amount of RAM.

All container metrics, whether they're managed by Kubernetes or the Docker service directly, are collected by the cgroups collector. Because this collector integrates with the cgroups Linux kernel feature itself, monitoring containers requires zero configuration on most Kubernetes clusters.

After following this guide, you should have a more comprehensive understanding of how to monitor your Kubernetes cluster with Netdata. With this setup, you can monitor the health and performance of all your nodes, pods, services, and k8s agents. Pre-configured alarms will tell you when something goes awry, and this setup gives you every per-second metric you need to make informed decisions about your cluster.

The best part of monitoring a Kubernetes cluster with Netdata is that you don't have to worry about constantly running complex kubectl commands to see hundreds of highly granular metrics from your nodes. And forget about using kubectl exec -it pod bash to start up a shell on a pod to find and diagnose an issue with any given pod on your cluster.

And with service discovery, all your compatible pods will automatically appear and disappear as they scale up, move, or scale down across your cluster.

To monitor your Kubernetes cluster with Netdata, start by installing the Helm chart if you haven't already. The Netdata Agent is open source and entirely free for every cluster and every organization, whether you have 10 or 10,000 pods. A few minutes and one helm install later and you'll have started on the path of building an effective platform for troubleshooting the next performance or availability issue on your Kubernetes cluster.