Your ability to monitor the health of your systems and applications relies on your ability to create and maintain the best set of alarms for your particular needs.

In v1.18 of Netdata, we introduced dimension templates for alarms, which simplifies the process of writing alarm entities for charts with many dimensions.

Dimension templates can condense many individual entities into one—no more copy-pasting one entity and changing the alarm/template and lookup lines for each dimension you'd like to monitor.

The fundamentals of foreach#

Our dimension templates update creates a new foreach parameter to the existing lookup line. This is where the magic happens.

You use the foreach parameter to specify which dimensions you want to monitor with this single alarm. You can separate them with a comma (,) or a pipe (|). You can also use a Netdata simple pattern to create many alarms with a regex-like syntax.

Let's get into some examples so you can see how the new parameter works.

⚠️ The following entities are examples to showcase the functionality and syntax of dimension templates. They are not meant to be run as-is on production systems.

Let's say you want to monitor the system, user, and nice dimensions in your system's overall CPU utilization. Before dimension templates, you would need the following three entities:

With dimension templates, you can condense these into a single alarm. Take note of the alarm and lookup lines.

The alarm line specifies the naming scheme Netdata will use. You can use whatever naming scheme you'd like, with . and _ being the only allowed symbols.

The lookup line has changed from of to foreach, and we're now passing three dimensions.

In this example, Netdata will create three alarms with the names cpu_template_system, cpu_template_user, and cpu_template_nice. Every minute, each alarm will use the same database query to calculate the average CPU usage for the system, user, and nice dimensions over the last 10 minutes and send out alarms if necessary. 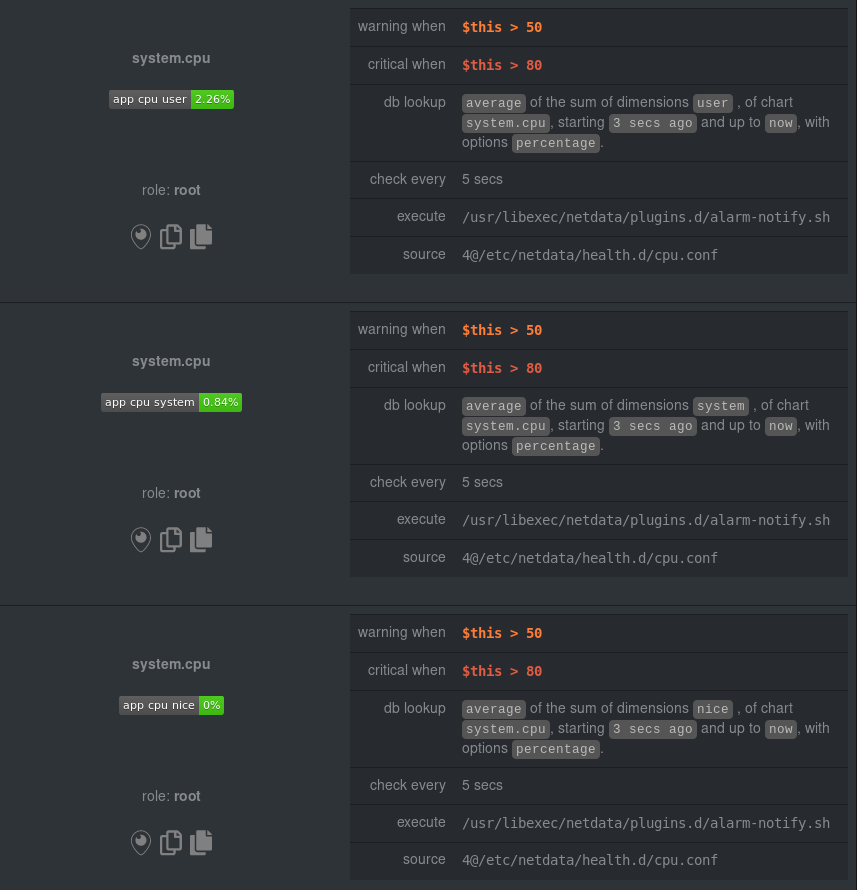 Let's look at some other examples of how foreach works so you can best apply it in your configurations.

In the last example, we used foreach system,user,nice to create three distinct alarms using dimension templates. But what if you want to quickly create alarms for all the dimensions of a given chart?

Instead of monitoring system CPU usage, let's monitor per-application CPU usage using the apps.cpu chart. Passing a wildcard as the simple pattern tells Netdata to create a separate alarm for every process on your system:

This entity will now create alarms for every dimension in the apps.cpu chart. Given that most apps.cpu charts have 10 or more dimensions, using the wildcard ensures you catch every CPU-hogging process.

Dimension templates also work with alarm templates. Alarm templates help you create alarms for all the charts with a given context—for example, all the cores of your system's CPU.

By combining the two, you can create dozens of individual alarms with a single template entity. Here's how you would create alarms for the system, user, and nice dimensions for every chart in the cpu.cpu context—or, in other words, every CPU core.

On a system with a 6-core, 12-thread Ryzen 5 1600 CPU, this one entity creates alarms on the following charts and dimensions:

And how just a few of those dimension template-generated alarms look like in the Netdata dashboard. 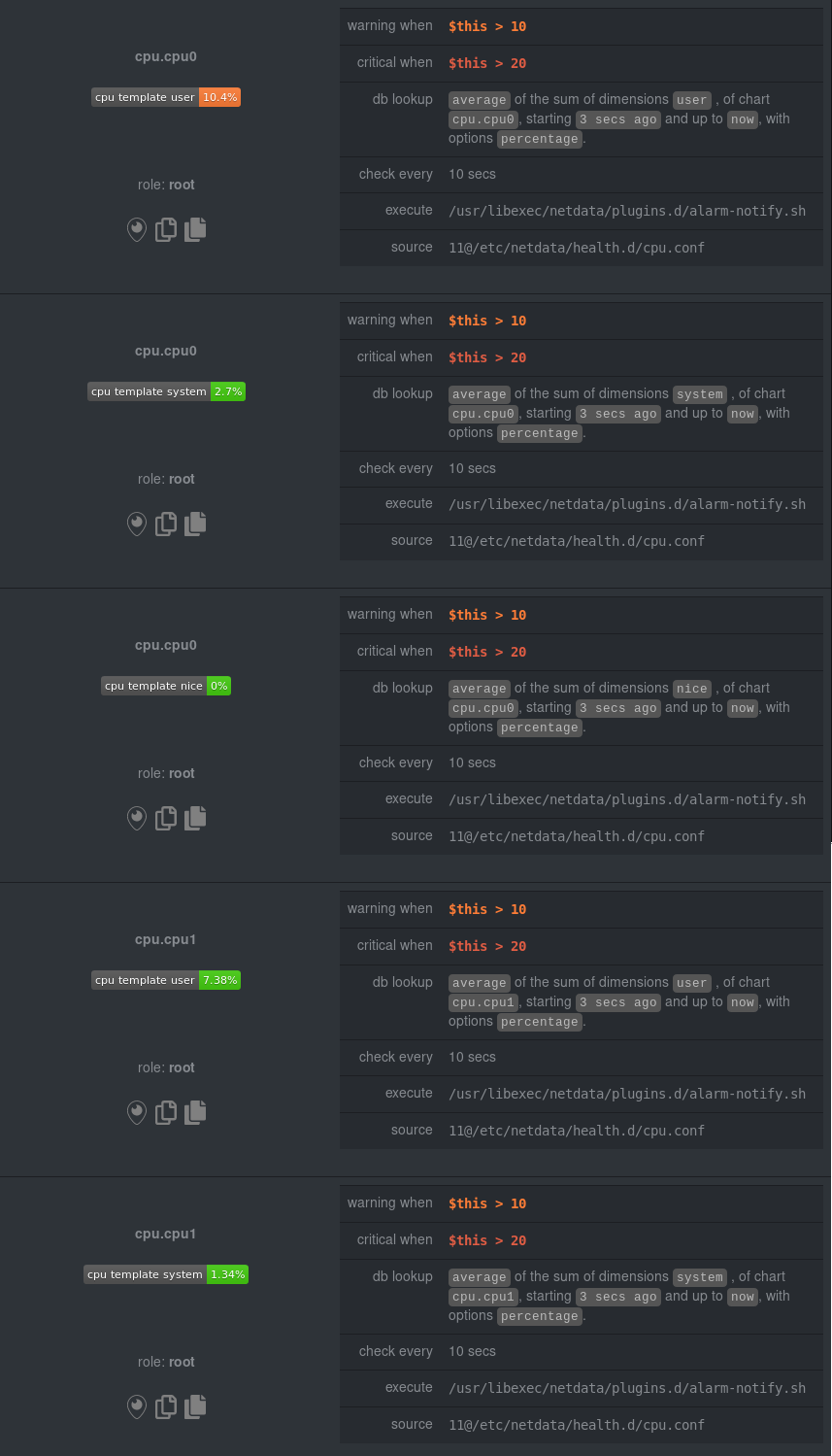 All in all, this single entity creates 36 individual alarms. Much easier than writing 36 separate entities in your health configuration files!

We hope you're excited about the possibilities of using dimension templates! Maybe they'll inspire you to build new alarms that will help you better monitor the health of your systems.

Or, at the very least, simplify your configuration files.

For information about other advanced features in Netdata's health monitoring toolkit, check out our health documentation. And if you have some cool alarms you built using dimension templates,

If you need help after reading this guide, search our community forum for an answer. There's a good chance someone else has already found a solution to the same issue.