Note: Check out the Netdata Anomaly Advisor for a more native anomaly detection experience within Netdata.

This collector uses the Python PyOD library to perform unsupervised anomaly detection on your Netdata charts and/or dimensions.

As this is a somewhat unique collector and involves often subjective concepts like anomalies and anomaly probabilities, we would love to hear any feedback on it from the community. Please let us know on the community forum or drop us a note at [email protected] for any and all feedback, both positive and negative. This sort of feedback is priceless to help us make complex features more useful.

Below is an example of the charts produced by this collector and how they might look when things are 'normal' on the node. The anomaly probabilities tend to bounce randomly around a typically low probability range, one or two might randomly jump or drift outside of this range every now and then and show up as anomalies on the anomaly chart. 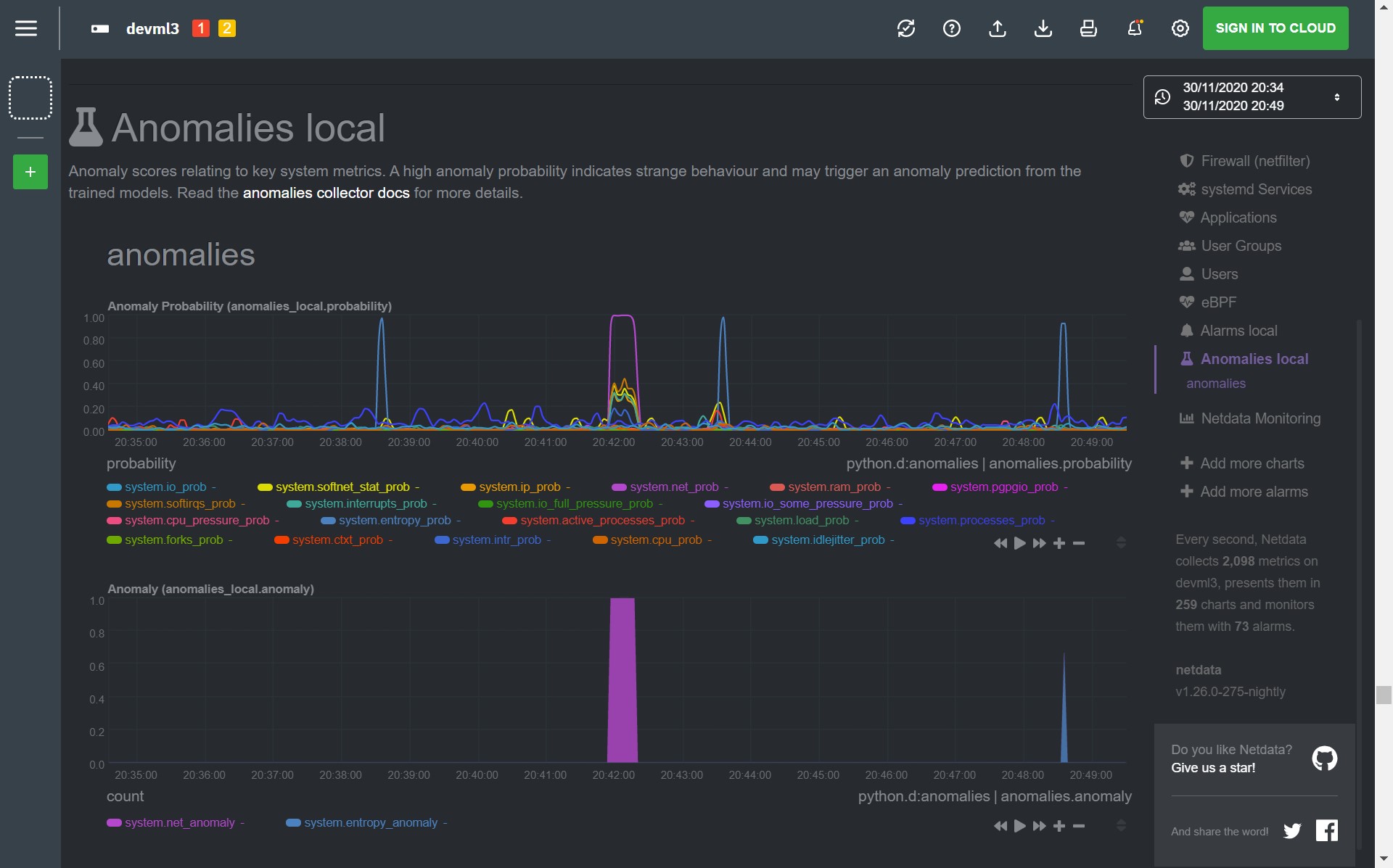 If we then go onto the system and run a command like stress-ng --all 2 to create some stress, we see some charts begin to have anomaly probabilities that jump outside the typical range. When the anomaly probabilities change enough, we will start seeing anomalies being flagged on the anomalies.anomaly chart. The idea is that these charts are the most anomalous right now so could be a good place to start your troubleshooting. 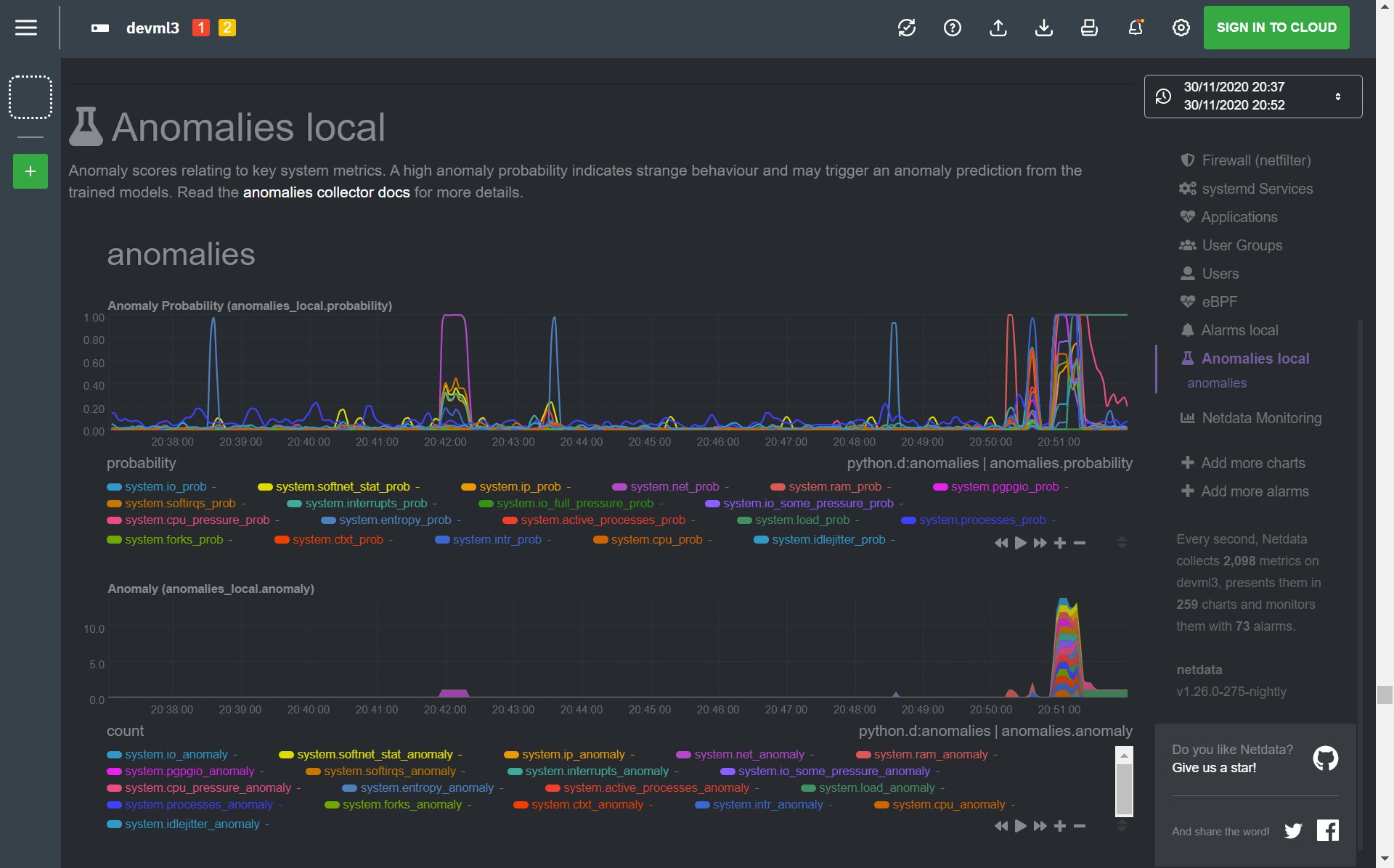 Then, as the issue passes, the anomaly probabilities should settle back down into their 'normal' range again. 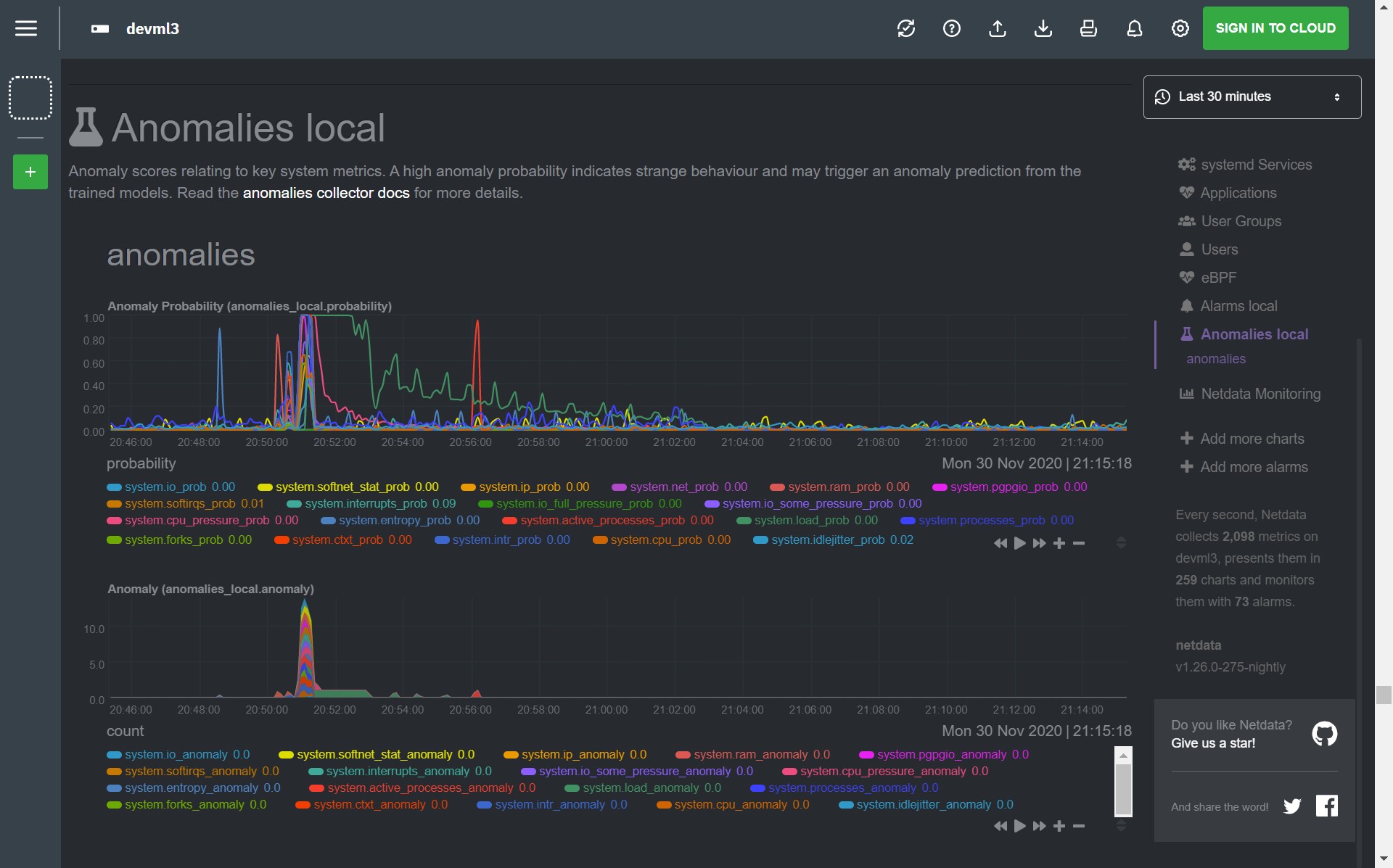 Install the Python requirements above, enable the collector and restart Netdata.

The configuration for the anomalies collector defines how it will behave on your system and might take some experimentation with over time to set it optimally for your node. Out of the box, the config comes with some sane defaults to get you started that try to balance the flexibility and power of the ML models with the goal of being as cheap as possible in term of cost on the node resources.

Note: If you are unsure about any of the below configuration options then it's best to just ignore all this and leave the anomalies.conf file alone to begin with. Then you can return to it later if you would like to tune things a bit more once the collector is running for a while and you have a feeling for its performance on your node.

Edit the python.d/anomalies.conf configuration file using edit-config from the your agent's config directory, which is usually at /etc/netdata.

The default configuration should look something like this. Here you can see each parameter (with sane defaults) and some information about each one and what it does.

In the anomalies.conf file you can also define some "custom models" which you can use to group one or more metrics into a single model much like is done by default for the charts you specify. This is useful if you have a handful of metrics that exist in different charts but perhaps are related to the same underlying thing you would like to perform anomaly detection on, for example a specific app or user.

To define a custom model you would include configuration like below in anomalies.conf. By default there should already be some commented out examples in there.

name is a name you give your custom model, this is what will appear alongside any other specified charts in the anomalies.probability and anomalies.anomaly charts. dimensions is a string of metrics you want to include in your custom model. By default the netdata-pandas library used to pull the data from Netdata uses a "chart.a|dim.1" type of naming convention in the pandas columns it returns, hence the dimensions string should look like "chart.name|dimension.name,chart.name|dimension.name". The examples below hopefully make this clear.

If you would like to log in as netdata user and run the collector in debug mode to see more detail.

If you would like to go deeper on what exactly the anomalies collector is doing under the hood then check out this deepdive tutorial in our community repo where you can play around with some data from our demo servers (or your own if its accessible to you) and work through the calculations step by step.

(Note: as its a Jupyter Notebook it might render a little prettier on nbviewer)