The exporting engine is an update for the former backends which is deprecated and will be deleted soon. It has a modular structure and supports metric exporting via multiple exporting connector instances at the same time. You can have different update intervals and filters configured for every exporting connector instance. The exporting engine has its own configuration file exporting.conf. Configuration is almost similar to backends. The most important difference is that type of a connector should be specified in a section name before a colon and an instance name after the colon. Also, you can't use host tags anymore. Set your labels using the [host labels] section in netdata.conf.

Netdata supports external databases and services for archiving the metrics, or providing long term dashboards, using Grafana or other tools, like this: 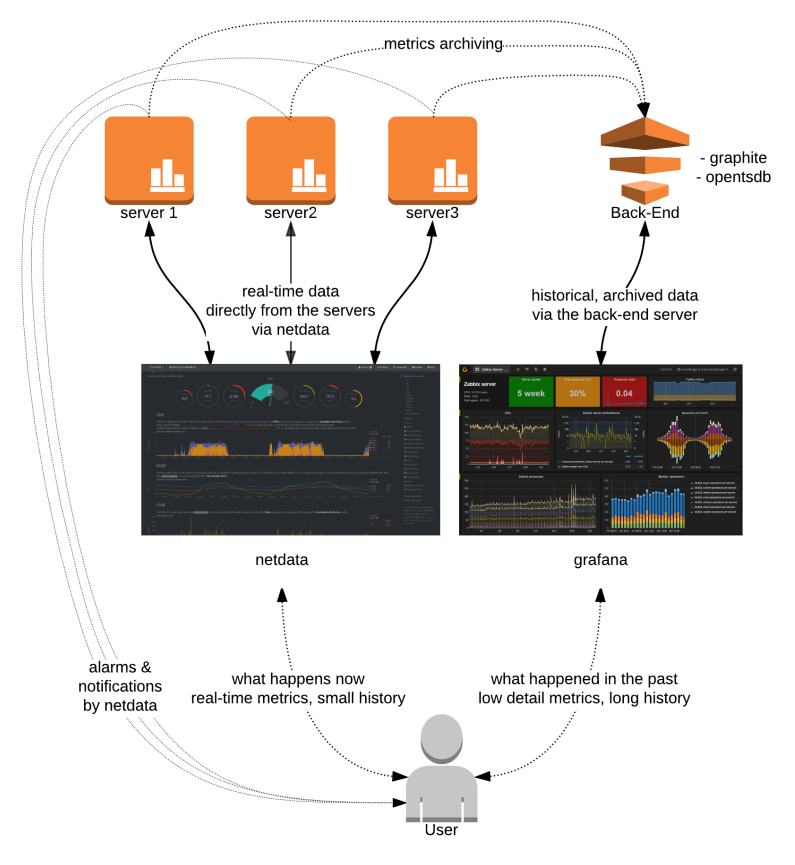 Since Netdata collects thousands of metrics per server per second, which would easily congest any database server when several Netdata servers are sending data to it, Netdata allows sending metrics at a lower frequency, by resampling them.

So, although Netdata collects metrics every second, it can send to the external database servers averages or sums every X seconds (though, it can send them per second if you need it to).

Example IPv6 and IPv4 together:

When multiple servers are defined, Netdata will try the next one when the previous one fails.

Netdata also ships nc-exporting.sh, a script that can be used as a fallback exporting connector to save the metrics to disk and push them to the time-series database when it becomes available again. It can also be used to monitor / trace / debug the metrics Netdata generates.

For the Kinesis exporting connector destination should be set to an AWS region (for example, us-east-1).

For the MongoDB exporting connector destination should be set to a MongoDB URI.

For the Pub/Sub exporting connector destination can be set to a specific service endpoint.

Starting from Netdata v1.20 the host tags (defined in the [backend] section of netdata.conf) are parsed in accordance with a configured backend type and stored as host labels so that they can be reused in API responses and exporting connectors. The parsing is supported for graphite, json, opentsdb, and prometheus (default) backend types. You can check how the host tags were parsed using the /api/v1/info API call. But, keep in mind that backends subsystem is deprecated and will be deleted soon. Please move your existing tags to the [host labels] section.